We'll start by looking at the BD-RB Setup dialog as this is where a number of defaults used for all backups are set. Your choices for some of these options may change when you make backups for media of different sizes, particularly when switching between DVD and BD discs. If your backups are always the same type (full disc or movie-only) and burned to the same media (DVD, DVD DL or BD-R) you will probably find that most or all of these settings don't need to be changed from one backup to the next.

Select Setup from the main BD-RB window to open the BD-RB Setup dialog. 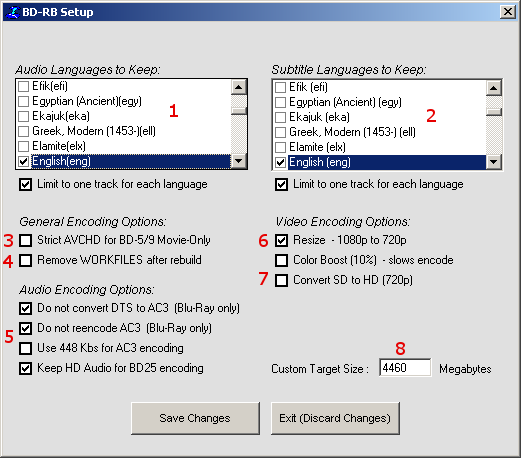 Typically the first step in saving space is removing unwanted audio streams. Make sure only the languages you want to keep are selected here and audio in any other language will be removed. Checking Limit to one track for each language will remove all but the first audio stream of any given language. Languages not checked above will still be removed entirely. You can select additional audio streams for individual backups.

In most cases subtitles don't take up enough space to worry about. Uncheck any languages you want automatically removed. You can change select additional subtitle streams for individual backups.

It's not required that Blu-ray players support playback of BDMV (the standard commercial Blu-ray format) from DVD media. If you want to ensure compatibility with the maximum number of Blu-ray players you can make Movie-Only backups and check this box. It will make your backups AVCHD compliant, meaning it will play on more Blu-ray players.
AVCHD compliance will also require audio be in either Dolby Digital (AC-3) format at a bitrate of up to 640kbps or uncompressed LPCM format. Audio in other formats will automatically be converted with this option checked.

This option tells BD-RB to delete the intermediate files created during the demuxing and encoding process. Keep in mind that BD-RB is currently beta software. Leaving these files after the job completes may help track down problems if you ask the author for help. Checking it will, of course, remove unneeded files from your hard drive in the case of a successful backup.

Blu-ray Rebuilder has more options than remove and keep for audio streams. Blu-ray supports a broader spectrum of audio formats and bitrates than DVD. Since these additional formats are encoded at higher bitrates than their DVD predecessors it may be useful to re-encode to save space, particularly when you are backing up to DVD or DVD DL media. Due to the more limited audio options in the AVCHD standard, some options are only available if you are authoring your discs as BDMV like the original.

Do not convert DTS to AC3 (Blu-ray only)

When unchecked, DTS audio will be converted to Dolby Digital (AC3) automatically. Dolby Digital files are encoded at a lower bitrate. Although the significantly reduced media size of DVD media makes it a good idea (generally) to avoid keeping DTS audio, for BD-R/RE backups it's not as big a deal. Keep in mind that re-encoding to AC-3 will always result in some quality loss. You are usually better off keeping an audio stream you don't need to re-encode whenever possible.

Do not reencode AC3 (Blu-Ray only)

Use 448Kbps for AC3 encoding

Although lossless audio is too big to allow for reasonable quality bitrate on a single or dual layer DVD, if you are going to burn BD-RB's output to a 25GB BD-RE it's less of a concern. Check this box to keep higher quality (and bitrate) audio unchanged.

Resizing to 720p can produce significantly better quality, especially when your target media is significantly smaller than the original Blu-ray. It's also quite useful if you are resizing standard definition (SD) extras to HD resolution.

If you prefer the upscaling performed by AviSynth (via BD-RB) to the upscaling offered by your Blu-ray player or TV use this option. Remember, if there are a lot of SD extras you may also need to resize HD portions of the disc to 720p to retain quality.

Assuming you are making backups intended for burning to DVD or BD media you shouldn't need to set the target size normally. If you do want to change the size of Blu-ray Rebuilder's output you can set it here. You will also need to select the Custom Target Size option when setting up your backup.
This option is particularly useful if you are doing 1 Pass CQ (constant quality) encoding and are getting output that's significantly smaller or larger than your disc. Single pass encoding requires a certain amount of educated guessing involving the encoding of samples taken from throughout each title. Although generally reliable, when it's not you can 'fool' BD-RB into encoding at a higher quality by using a custom target size.

Your're now ready to return to the main BD-RB window and start backing up your Blu-ray discs. Use the Save Changes button to save any settings you have modified. The Exit (Discard Changes) button will return to the main Blu-ray Rebuilder window without changing your settings.