Blu-ray Rebuilder gives you the option to make either Movie-Only or Full Disc backups. Obviously the decision on which to make will depend on the size of your target media and whether you need AVCHD compliance for your Blu-ray player.

Start by selecting Full Backup from the Mode menu. If you want the extras encoded at slightly lower quality, reducing the time required to make a backup, you can also select "Quicker" Encode for Extras. 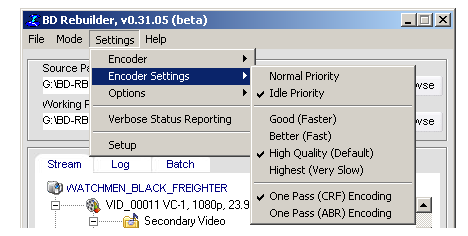 By defaulting to Idle Priority for video encoding BD-RB allows you to use your computer for most tasks while your backup is being made. Setting it to Normal Priority will produce a marginal decrease in encoding time, but make other programs run much slower.

BD-RB doesn't have much in the way of AVC encoder (x264) fine tuning, but you can select from four different quality presets. Higher quality will, predictably, result in longer encode times.

By default, BD-RB encodes video in 2 pass VBR mode. This gives you a balance of quality and predictable output size. If you prefer you can switch to one of two single pass modes, constant quality (CFR) or average bitrate (ABR) but be aware that either quality or predictability may suffer as a result, depending on which single pass option you choose. If you want to switch back to 2 pass VBR mode simply click on whichever single pass mode is selected to remove the checkmark.

CRF, or Constant Rate Factor, encoding maintains a constant quality throughout the encode, often producing better (or at least more consistent) quality than any other encoding mode. However, size prediction for CRF encoding is an imperfect science and it can result in output that's bigger or smaller than intended.

ABR encoding is similar to 2 pass VBR mode except for the lack of a second pass. Although this may seem like a small thing, the lack of an analysis pass means decisions on how to allocate bitrate for highest quality results will suffer.

You can choose to make your backup to fit on a DVD-5 (standard DVD+/-R), a DVD-9 (dual layer DVD+/-R) or BD-25 (single layer BD-R). You can also select the Custom Target Size set previously in BD-RB Setup.

Auto-burn to Disc (with ImgBurn)

This option tells BD-RB to burn the output files automatically using the excellent (and free) ImgBurn. Make sure you have ImgBurn installed before selecting this. 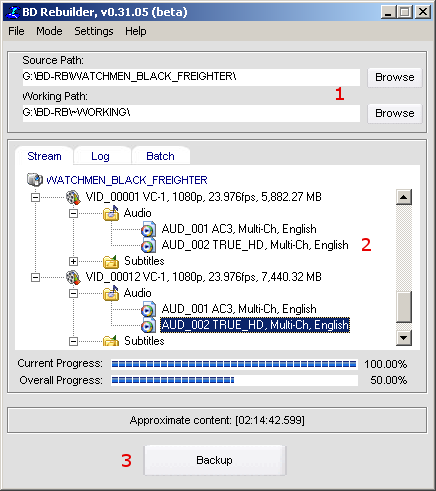 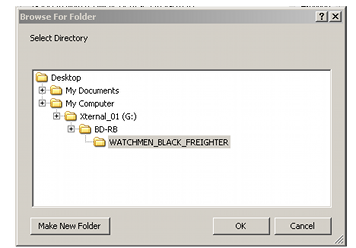 Use the Browse buttons to locate the Source Path (your Blu-ray disc files) and Working Path where you want BD-RB to put its working and output files. 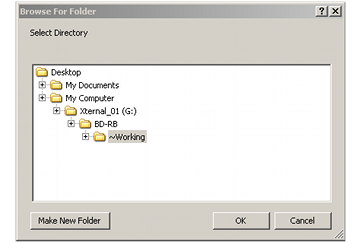 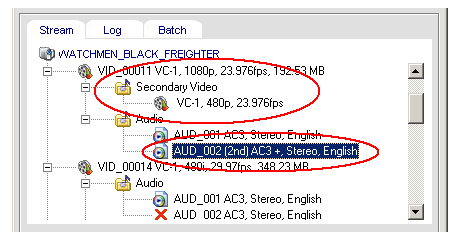 You can manually select audio and subtitle streams to keep or remove for each encode. By default the audio and subtitle streams will be kept according to the settings you selected previously in BD-RB Setup. You can manually select or de-select audio and subtitle streams by double-clicking on them. Streams selected will be kept as-is or re-encoded according to the settings from BD-RB Setup.
Some streams which initially appear to be alternate audio for the main video program are marked to indicate they belong to a secondary program. Because Blu-ray uses MPEG Transport Streams it's possible to have separate programs, much the same way a DTV broadcast can include multiple channels, there may be secondary video streams. In the example on the right there title has a main video and audio stream and a second program with a single audio stream.

Once you have all the options set to your liking you can click the Backup button. BD-RB will spend the next few hours (perhaps more than a few) making your backup.