Nero Recode offers high quality MPEG-4 encoding capabilities in a very user friendly interface. Among its features is the ability to convert from one framerate to another. Recode uses frame duplication or removal to change framerates. This means you can keep the audio as-is from the original PAL file without making any changes.

Although Nero is perhaps the easiest tool for PAL to NTSC conversions, it doesn't work flawlessly. When converting from PAL to NTSC film (23.976fps) it sometimes replaces original frames with duplicates. This leads to some judder, which is a sort of jerking that happens when some frames (the duplicates) are shown longer than others

Despite a few problems, Nero Recode PAL to NTSC conversions are watchable, if not quite as good as they could be.

How to Convert PAL to NTSC in Recode


Once you've opened your source video file in Recode you can click on the Settings button on the Video tab. 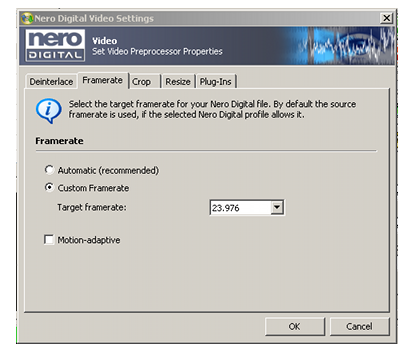 
On the Framerate tab, select Custom Framerate and then either 23.976 or 29.97 if your PAL video is progressive. If you convert to 23.976fps it's likely you'll also need to add pulldown flags to the final video as well. You can find instructions for that later in this guide. Read Page 5 for pulldown of MPEG-2 files or Page 6 for Pulldown of MPEG-4 (AVC) video. 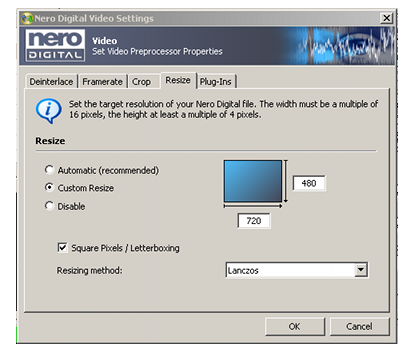 
If you will be putting your NTSC video on a DVD you should also resize to a NTSC resolution, such as 720x480. You can do that on the Resize tab.


As you can see below, the video converted by Nero (left side) has one original frame duplicated and another removed. This results in some unnecessary judder (jerkiness) on playback.


If you convert directly to 29.97fps there's obviously no need to remove any frames. Instead, one out of every five frames is duplicated. This results in judder similar to what NTSC viewers are used to when watching film content, although someaht more pronounced since entire frames are repeated.