Converting from PAL to NTSC is usually a destructive process. If you convert the video by slowing it down, as described in the AviSynth section, you still have to adjust the audio to match. If you have a lossy audio track, which has become a defacto standard in most applications, this will result in quality loss. For audio tracks with more than two channels it's also considerably more complex than most people are ready for.


One way to potentially solve this problem is using pulldown. You may already be familiar with the concept of pulldown as it's used for displaying 24fps film content as 29.97fps NTSC video. In simplest terms pulldown involves repeating one half of every other frame (1 field out of 4) to produce the additional frames. Although it produces a slight stutter in the video, if you're used to watching NTSC you likely don't even notice it.


What's less common is the use of alternate pulldown patterns. Repeating one out of every four fields, called 2:3 pulldown produces six additional frames per second. For 25fps PAL video that would be one too many. Instead we need a more complex and somewhat irregular pattern. This pattern, called 2:2:3:2:3 pulldown, repeats two fields out of every ten (5 frames), resulting in five extra frames per second. During this process an occasional duplication is skipped, reducing the framerate to 29.97fps.


Since the speed remains identical to the original PAL video, the audio doesn't need to be altered at all. There is no quality loss from decoding and re-encoding, and no complex processes or expensive tools are required. 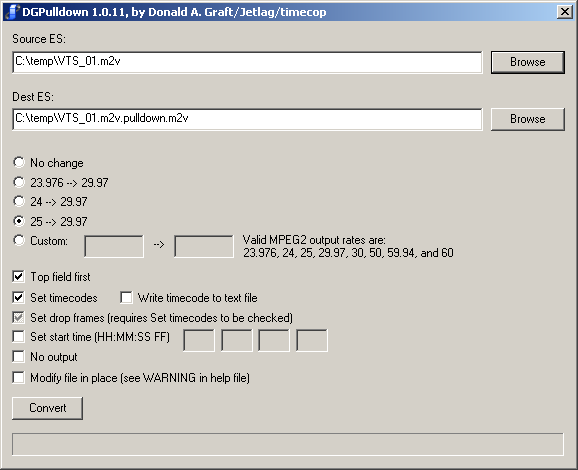 Using DGPulldown is about as simple as it can get. Use the Browse buttons at the top to set the source and destination files. Select 25 --> 29.97 and click the Convert button. Wait a few minutes and you will have a video file that plays at 29.97fps.