In this guide, we will take a look at how to disassemble your Xbox 360 from the start right down to the removable of the motherboard from the inner shell of the console. The guide also covers removing the 2.5" SATA hard disk drive from the HDD bay. This guide is suitable for those looking to get to the DVD-ROM drive for swapping or flashing also. It should be relatively easy to follow as long as you have the required screwdrivers and take care as you are disassembling the case. Please note that you will void your warranty by opening your Xbox 360 console like this. 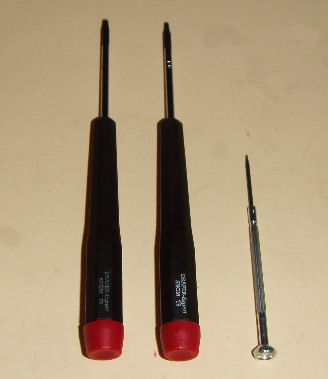 
You will need a Torx screwdriver set. If you have looked around the Internet at different disassembling guides for the Xbox 360, you will notice that there is little agreement about the size of the screwdrivers you actually need (but they must be Torx). I disassembled my Xbox 360 with a T6 and T8 screwdriver, but other guides suggest T7, T10 and T12. Therefore, I highly recommend you get a relatively cheap set of TX screwdrivers from your local DIY store and use them as they fit.

You will also need a very small sized flat-heat screwdriver like the cheap one you can see in Figure 1 that came part of a €2 set from a discount store (do not use these to unscrew anything, because they will break, but having one as small fitting as the one shown is vital for releasing some clasps on the Xbox 360 case.)