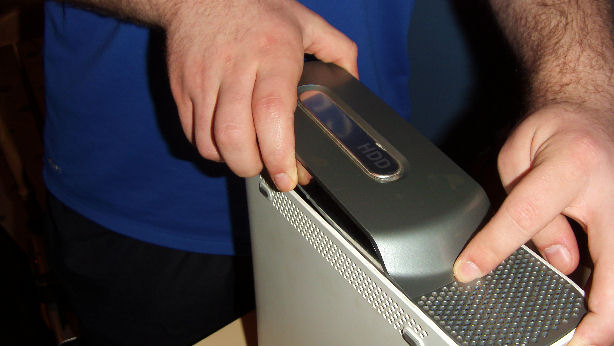 Figure 2 : Removing the HDD Bay/Adapter from the intact case.


As shown in Figure 2, press a finger down on the release button for the HDD bay and lift it out of the slot until it is totally disconnected from the case. 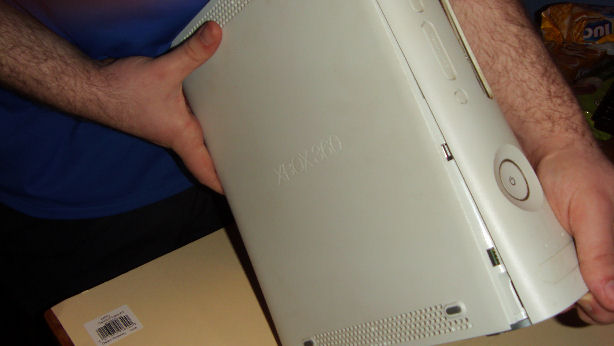 
Hold the Xbox 360 as shown in Figure 3 and use one hand to pop-off the faceplate as shown. It will literally pop-off with enough force (and won't snap) if you grab it from the bottom of the console and push it outwards with your finger tips as shown. 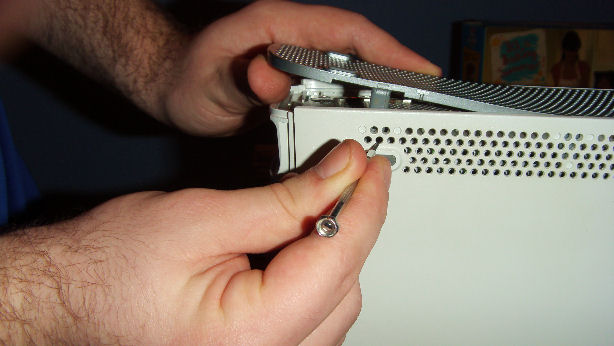 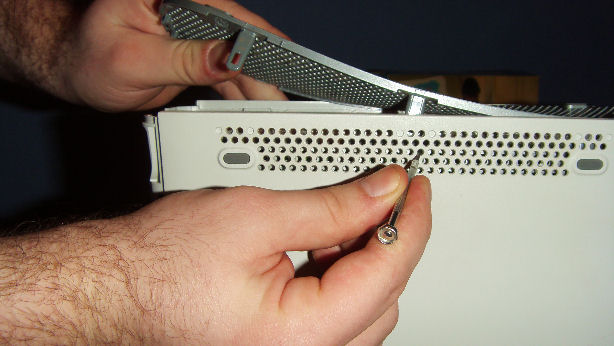 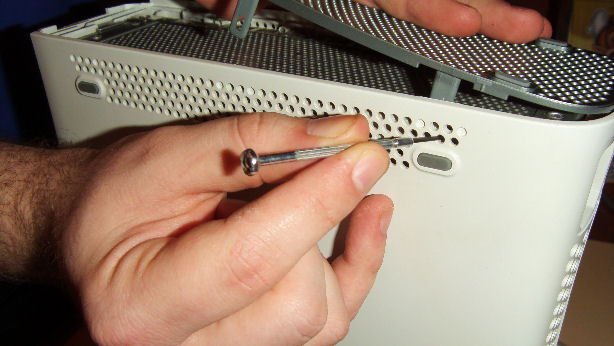 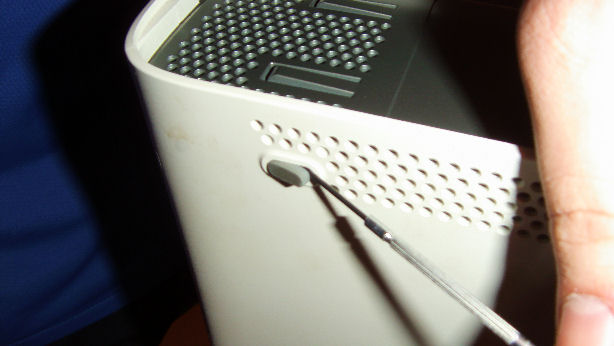 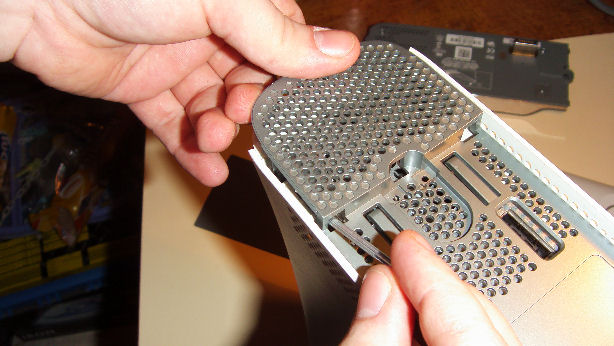 Figure 8 : Use flat-head screwdriver to pop out clasp 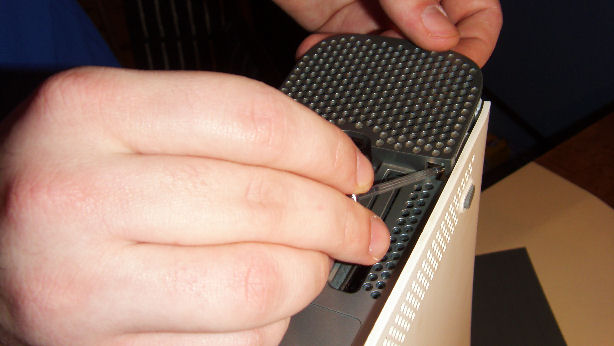 Figure 9: Use flat-head screwdriver to pop out clasp 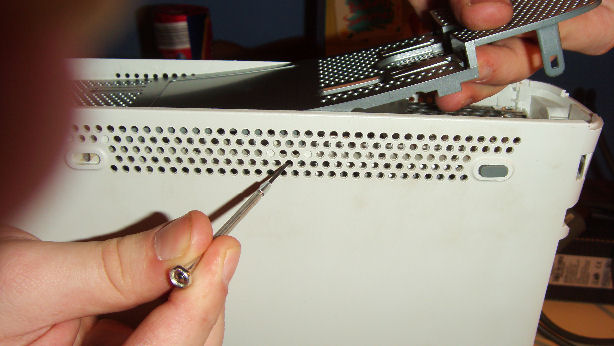 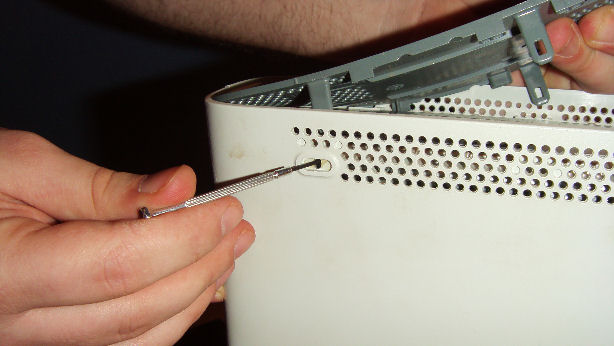 
Removing the left (top) ventilation shield is a little bit harder than the bottom. First of all you should remove the two rubber pads as shown in Figure 7, which will reveal one with a hole you can use to pop-out a clasp later. Make sure to keep the pads somewhere where you won't lose them as they are very small. They will simply stick back in later.

Figure 10 and Figure 11 show how, just like before, you can use the flat-head screwdriver or something that will fit to release the claps through the ventilation holes on the outer case, only this time one of these holes will be positioned where you previously removed a rubber padding. Keep working on this until the ventilation shield comes off, then lay the console down horizontally.

Release 4 Clasps on Front of Console 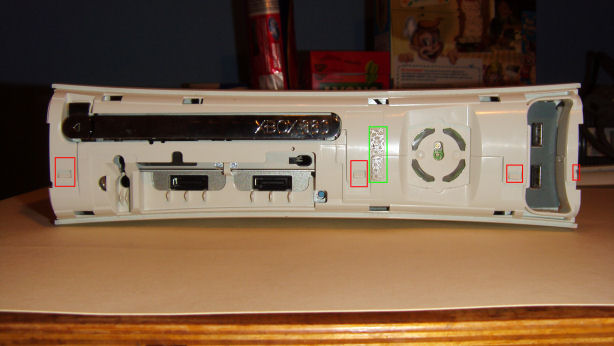 
Figure 12 shows where each side of the Outer case is clasped together in red. The green marker on the picture shows where the Microsoft sticker will be. You need to simply peel off this sticker to be able to open the console any further. As for the red clasps, if you look closely at them (click picture to enlarge it) you will notice they are quite easy to release with a flat-head screwdriver or something that will be able to fit. Simply pop all four off until you have that half of the case opened as shown below in Figure 13. 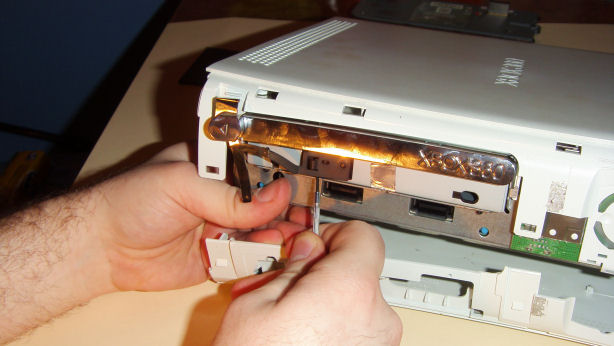 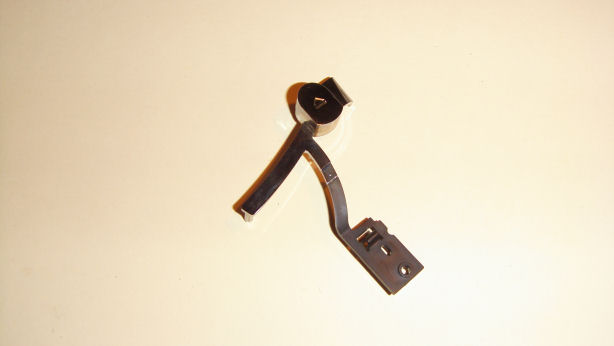 
You need to pop the DVD-ROM Eject button off when the front clasps of your case have been released. To do this, look at Figure 13, simply use the flat-head screw-driver. Push it in underneath the black clasp and simply push it off, you will not break it. Then put the DVD-ROM eject button somewhere safe. Make sure not to allow the front clasps rejoin and turn the console around to release the clasps on the rear of the console as shown in Figure 15. 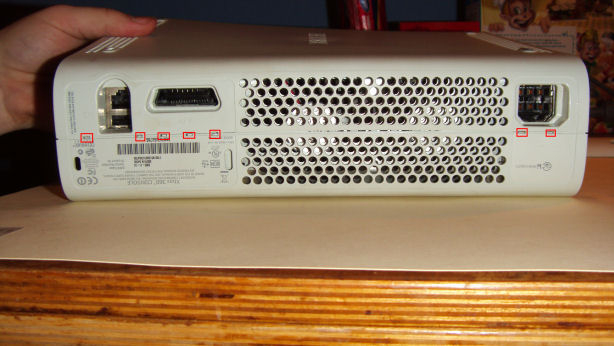 Figure 15: Shows the location of clasps at the back of the console in red 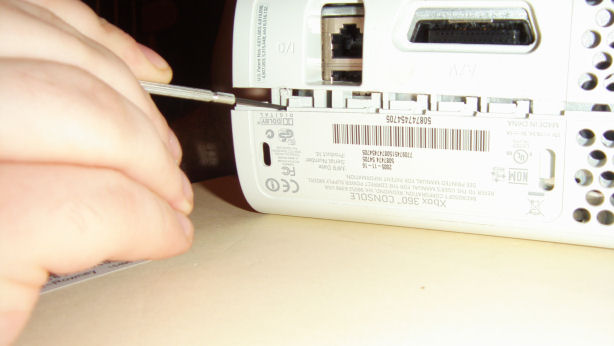 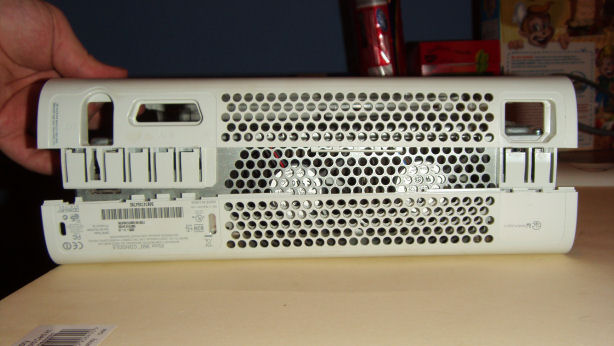 Figure 17: All clasps released, case can now slide off.


Figure 15 shows the back of an Xbox 360 (Xenon model) and highlights in red where you can find the spaces you need to push the tiny flat head screwdriver into to release the clasps. Please note however that newer models of the console will have a slightly different arrangement at the back but the concept is still the same.

In Figure 16, it shows how you can push the flat-head screwdriver into the small rectangular spaces provided. Push it right in there and don't worry about making tiny bits of noticeable damage to the outer case, this is unavoidable. For each space, you will hear a loud clicking noise when the clasp has been released. It helps to be trying to lift the case off when you are doing this so as to not allow then re-clasp, which is very annoying and will happen.

Figure 17 shows all the clasps released and the case being held just barely on the console. 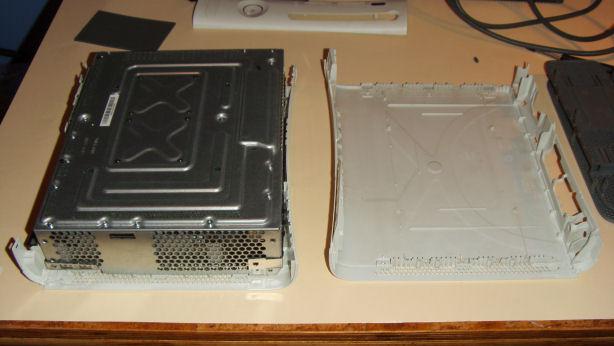 Figure 18: The bottom half (left side) of the case removed


Once you have released the front and back clasps holding the outer case together, you can simply lift off the bottom half of the case, exploring the metallic inner shell of the case for the first time.