Building Your Own Render Farm


Okay, it's not actually a render farm, but because of the way DVD Rebuilder divides DVDs into individual cells to be encoded separately, it's possible to encode different segments with different computers simultaneously. Doing this requires a small amount of Windows networking knowledge and the ability to write a batch file to set it up. Both are easy, but essential to RBFarm.

If you have the computers available, and can set it up, you can greatly improve overall encoding speed. I've encoded with as many as 4 PCs at the same time and managed to cut encoding time by 2/3. If you have extra PCs that are reasonably close in encoding speed to your main PC (ie don't use a Celeron 400 to help a P4 3GHz) you can get a noticeable speed increase. Adding a mobile Celeron 1.7GHz and an Athlon 900MHz to a P4 2.4GHz nearly doubled my speed, which was originally around twice real time for each pass. With 4 computers I get it done at about three times that speed so it gets done in anywhere from 35% to 50% the playing time of all the video being encoded instead of 95% to 120% of playing time.

Make sure there's a copy of RBFarm on each PC you will be using to encode. Each PC also needs to have a copy of CCE Basic, as well as AviSynth with MPEG2DEC3dg.dll and any other plugins you want to use. If you don't want to install DVD Rebuilder on the remote PCs you'll also need to make a couple of slight changes to the setup from the basic Rebuilder guide. MPEG2DEC3dg.dll needs to be in AviSynth's plugin directory instead of the same one as DVD Rebuilder.

I recommend starting RBFarm with a batch file, at least on any PC you want to use for other things while encoding. Starting it with a batch file will allow you to run it at Idle priority, which in turn will start each instance of CCE at idle priority. This has a negligible effect on encoding times, but will free up quite a bit of CPU time for other programs. Just don't try to run anything else that's CPU intensive. To start RBFarm this way, create the following batch file (OldMacdonald.bat) in the same directory as RBFarm: 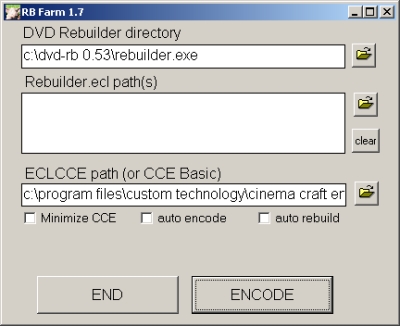 Now start up RBFarm (if you're using the batch file run OldMacdonald.bat to start RBFarm otherwise use RBFarm.exe) and click the button next to the 'ECLCCE path (or CCE Basic)' field. Browse to the directory CCE is installed in and select cct2.exe. When you get back to the main RBFarm window you'll need to manually edit the text field you just filled, and add cct2.exe to the end. Repeat this on each PC.

Before you can do anything else with RBFarm, you need to get your network set up correctly.
previousUsing RB-Opt  | nextSetting up and encoding