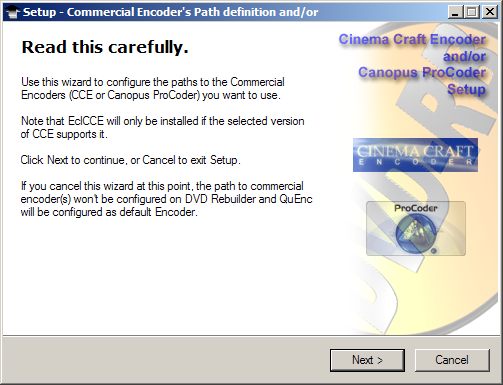 After the program files are installed the configuration tool for commercial encoders will run. If you have Cinema Craft Encoder or Canopus ProCoder installed this will set all the required options for DVD-RB to use them. If you don''t need to configure DVD-RB to use either of these encoders click the Cancel button to complete the installation process. If you want to run the configuration tool later there will be a shortcut in the Windows Start Menu group for DVD-RB. 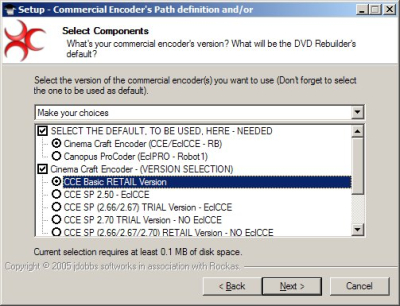 You''ll be prompted to set the path to your CCE (Cinema Craft Encoder) installation. If you have a version of CCE installed on your computer click the browse button and navigate to it. If you don''t have CCE installed you can browse to any folder you want but you can''t continue if you leave it blank. Click the Next button. In the Select Components window select the encoder you want DVD-RB Pro to use at the top of the list. Then go further down and select the version of either Cinema Craft Encoder or Canopus ProCoder you want to encode with. Click the Next button and then the Install button and the correct settings to use your encoder will be set for you.

Get Your Key File 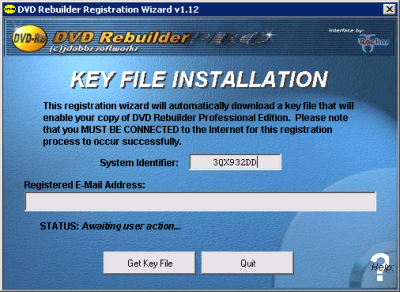 Before you can use DVD-RB Pro you''ll need to get your key installed. The first time it runs you''ll be prompted to enter the email address you registered when you purchased the software. When you click the Get Key File button it will connect to the internet and download the Key File directly to the DVD-RB Pro program folder. You won''t be able to run the program without this key file. The key file is unique for each computer running DVD-RB Pro.

If Your Computer Isn't Connected To The Internet


Before you make your first backup you should set some basic options in DVD-RB. There are a lot of options, but until you''ve made your first successful backup you should leave most of them at their default value, particularly if you''re not 100% sure what they do. Also, some settings may change from one backup to the next.

You can set DVD-RB Pro to automatically remove certain languages. On the Settings menu select Setup to open the General Setup window. At the bottom you''ll find the complete list of languages defined by the DVD-Video standard. The list on the left is for audio streams and the list on the right is for subtitles. Languages selected in these lists will be automatically be set to be removed from DVD all backups. You can override these settings for specific backups. The buttons below the lists will select all languages or no languages. Make sure you click the Save button after making any changes.
The General Setup window also has a Special Settings section on the right side where you can set whether DTS and Director''s Commentary audio streams are removed by default and whether your selected MPEG encoder will run minimized. At the top of the window are the paths to several programs DVD-RB Pro may need to function properly. Make sure the Path to entry for whichever encoder you plan to use is correct. To change the path click the folder icon to the right of whichever item you want to set. The Path to Decoder always needs to be set.


Now that you have all the necessary options setup you''re ready to start making backups. Since DVD-RB doesn''t have a built-in ripper you have to start by ripping the DVD with another program. Once you have it ripped, start DVD-RB.

The left side of the main DVD-RB window has three tabs marked Source Path, Destination, and Work Path. The Source Path tab will be visible when you first open DVD-RB. Click either the folder icon at the top of the tab or the one below Current Source Path to browse to your ripped DVD files. On the right side of the window the Input Settings tab will show you a list of titlesets with a detailed list of audio and subtitle streams in each one. Streams with a red X next to them are set to be removed in the backup process. Double clicking a stream will change whether it''s going to be removed or kept.
Use the Work Path tab to set the folder DVD-RB will use to create new MPEG files and the Destination tab to set the folder the final DVD files will be created in. Like the Source Path tab, each one has a folder icon at the top and another at the bottom you can click on to set the folder to be used.

Once you have the source, working, and destination directories selected, and the audio streams to be removed set, click the Backup button and wait for DVD-RB to finish. The Status Log tab on the right has a display of each step DVD-RB has taken since it was started. The same information will be saved in the Working Directory in a file called rebuilder.log. On the right side are two progress bars. The top bar is for the piece of the DVD that''s currently being analyzed, encoded, or rebuilt. The bottom bar is for the entire DVD. 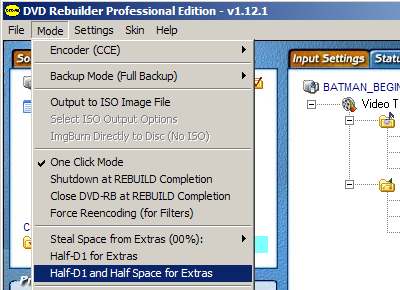 Once you've made a backup or two you'll probably want a little more control over the process. If you have a DVD with a lot of extras on it, like previews, deleted scenes, or documentaries, you may want to reduce the size of the main feature less that the extras for quality reasons. On the Mode menu you'll find some options for this. The simplest way to do it is to select Half D1 and Half Space for Extras. This will apply twice as much compression to extras and reduce resolution (the number of pixels per frame) by half to help avoid encoding artifacts from the lower bitrate. 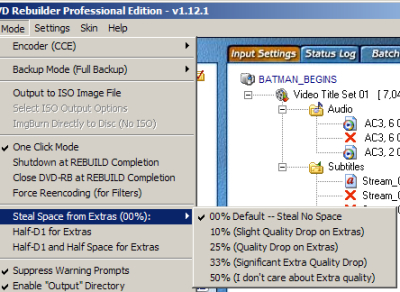 If you want more control over how much compression the extras get you can use the Steal Space from Extras option on the Mode menu. You can specify a 10%, 25%, 33%, or 50% bitrate reduction. This option doesn''t affect the resolution, but there''s a separate option - Half-D1 for Extras - that does. This option can be used either by itself or with Steal Space from Extras. It''s important to remember that extras are often encoded at lower quality than main features on the original DVD, so even if you reduce the size of extras by the same percentage as the main feature you may still want to reduce their resolution sometimes. 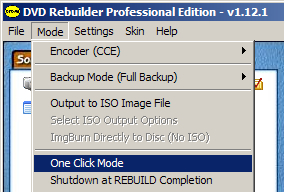 There may be things like copyright warnings and studio logos on a DVD that you don''t want to see. You can remove them by making changes in between DVD-RB''s preparation and encode steps. On the Mode menu uncheck the One Click Mode option. Now instead of a single Backup button at the bottom left you''ll have 3 buttons that say Prepare, Encode, and Rebuild. When you click the Prepare button DVD-RB will analyze the video to be re-encoded and write the files necessary to encode. 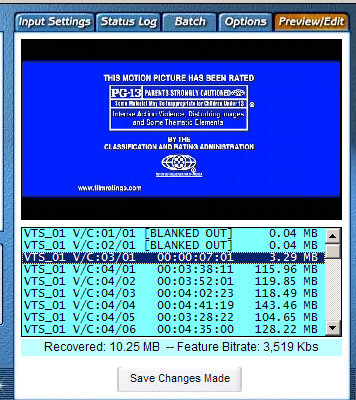 Once preparation has finished, click on the Preview/Edit tab on the right side. The Preview/Edit tab has a simple video preview at the top and a list of individual video segments below it. Each segment lists the title set (VTS) it''s in, the title number within that title set, its playing time, and the projected size it will be after re-encoding. If you make any changes on this tab you will need to click the Save Changes Made button at the bottom.
Click on a video segment to play it. Double click on it to set it to Blanked Out, meaning it won''t be played at all. Double click again to set it to a Slide Show, turning it into a slideshow of frames at a fixed interval. This greatly reduces the amount of space a title requires. Double click a third time to set it to No Reencode. This will copy the video from the original DVD, actually causing it to take up more space than if it were re-encoded. Always be careful when making changes on this tab. If you set the wrong options here you can end up with a DVD that''s too big. 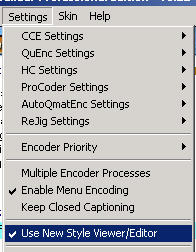 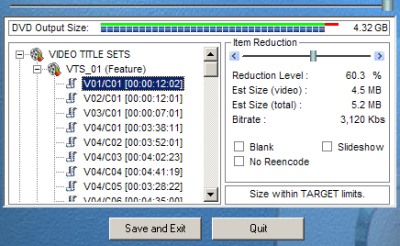 There are two major differences between the Beta Viewer/Editor and that standard one. It allows you to manually set the compression level of different segments. Use this feature with great care because setting different segments of the same title to different compression levels may produce a title with visible quality changes from one chapter to the next. It also gives you the ability to make changes to menus without affecting anything else. This feature may also cause problems if not used carefully because you may remove interactive functionality if you blank the wrong menu. When in doubt - leave the menus intact.


Much like the standard editor, when you click on a segment the video will play, however setting a segment to be blanked, changed to a slideshow, or kept from the original DVD is done by checking boxes to the right of the segment list. Above those checkboxes is additional information about the segment. The Reduction Level, Estimated Size of the video after re-encoding, Estimated size of the combined video and audio after re-encoding, and average bitrate for the re-encoded video are shown. In addition there''s a slider you can use to adjust the amount of compression being applied. Below the checkboxes is a box that tells you if the compression levels you have set will give you a disc that will fit in the size you have selected for your final DVD. You can also see the projected size for the entire DVD just above the list of titles where it says DVD Output Size. To save changes use the Save & Exit button at the bottom. To exit without saving changes click the Quit button.

The Beta Preview/Edit Window has an Action menu at the top. This menu has four options. Blank/Unblank ALL Extras (Movie/Menus Only) will set everything in title sets DVD-RB doesn''t have selected as containing the main feature to be blanked. Extras that are in the same title set as the main feature won''t be affected, and neither will menus in the main feature''s title set that link to titles set to be blanked. Clicking this option a second time will set extras to be kept. Convert ALL Extras to Slideshow works similarly, but instead of blanking extras it changes them to slideshows. Use the Allocate Saved Space option to resize the main feature after you lower the size of extras this won''t change the compression level of menus, regardless of what title set they''re in.


Unless you''re very familiar with DVD navigation commands, and how menus are programmed with them you generally shouldn''t remove anything. What appears to be a single menu when you watch a DVD is often a series of menus that play one after another, which may or may not have the same buttons on them. If you don''t want to take the time to understand how menus work you should probably stick to changing compression levels and converting motion menus to slideshows.
previousInstallation