Recent headlines | iPhone users: Do not join WiFi network named like this - your WiFi wont work after this 1
AfterDawn > Guides > Jailbreak an iPod Touch with v2 Software 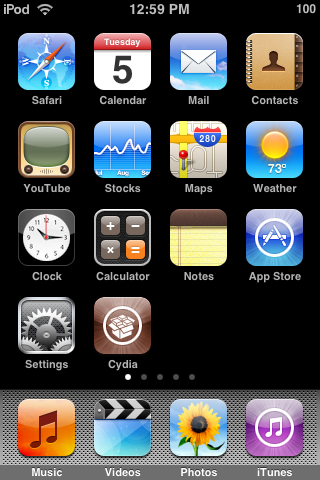 Once the Restore process is completed your iPod should have a new icon for a program called Cydia. This is similar to the Installer program for the v1.x firmware. It gives you access to a number of other programs ranging from established classics like Winterboard to others like the demo version of the original Quake. You'll also have full access to the iTunes App Store, just as though you hadn't performed the Jailbreak.


If you already had software from the App Store installed on your iPod it will automatically be restored from backup by iTunes. Simply click the Continue button and wait for the programs to be reinstalled.


Depending on what version of the iPod software you're using and how long it's been out you may find that you get some strange errors when synchronizing your iPod with iTunes. I tried with the original v2 software (firmware 1.2) and WinPwn 2.0.0.3 and had no problems. When I used iPod software v2.0.1 (firmware 1.2.0.1) I had 4 programs that began giving me sync errors. To correct this problem I removed them from iTunes and during the next Sync with my iPod I let them be removed instead of transferred. Then I downloaded all 4 again from iTunes. The installed normally and I haven't had any problems since.

previousRestoring from the Pwned firmware