Preparing for the US DTV Transition

The DTV transition in the US will be occuring on February 17, 2009. Sadly the government, broadcasters, and TV manufacturers have done a less than stellar job of informing the public about what's going on. The average US citizen probably doesn't even know if they're prepared or not.

Fortunately that's just the sort of thing we at Afterdawn are here for. If you want to make sure you're ready for digital TV just keep reading and everything will be explained. It's actually much simpler than you may think. You'll just need to know a few things about your TV and where you receive broadcasts from. This article will explain the rest in the simplest terms possible.

What Exactly is Changing?


In the US we've had essentially the same TV system for more than half a century. Although features like closed captions and stereo sound have been added over the years, the basic signal hasn't changed since the mid-1950s. This is the NTSC analog television system. The specifics of how it works aren't really important here. What is important is that practially all these analog TV broadcasts will cease on the morning of February 17, 2009.

What Do You Need To Do To Prepare


That's a complicated question, and really it's what you should know when you finish reading this. There are basically three possibilities. You may already have a TV with an ATSC (digital) tuner built in. If so, you're ready now and don't need to worry about getting ready. You may have an old-fashioned NTSC TV that needs a DTV converter. Or you may have a digital-ready TV that doesn't have a built in tuner. Although you can still use a DTV converter with these models, you'll be better off simply buying an external ATSC tuner.

Confused yet? Don't worry. It's probably simpler than you think


There are three basic ways that television broadcasts may reach your house. The oldest way of delivering TV signals is Over The Air (OTA) broadcasting. This what will be changing next year. If you use some form of antenna, such as rabbit ears, or even an attic or roof mounted unit you're receiving OTA broadcasts. Don't confuse this with satellite television, which uses a dish rather than an aerial antenna. If this is how you watch TV you'll definitely want to keep reading. 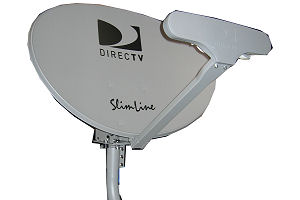 
If instead of an aerial you have a satellite dish mounted on your house or on another building, or perhaps even in your yard, you're watching satellite broadcasts. Satellite TV is already digital. If any digital to analog conversion is necessary it's handled by the satellite receiver you already have. These signals won't be affected by the transition.


If you have cable television your TV signal is delivered from a central point called a head end through a cable that comes into your house and either directly to your TV or to a digital cable receiver box that's connected to your TV. Like satellite television, if you receive your TV this way you won't be affected by the transmission, although you may need to think about it at some point in the future.