Setting up folders for dashboard before burning

This picture shows the folder/file structure you want when you create an Evolution X boot CD-RW. After you have a folder on your pc with the Evolution X files in it and setup as such, we need to edit the evox.ini file. This is the configuration file; we will probably need to change a few items so it matches how you are going to FTP using flashfxp into your Xbox.


Open the evox.ini file we put in our evox folders.


The section under [MISC] contains most of the things we will want to edit. Here's what mine looks like:
(I connect to the xbox with a router, so DHCP is enabled and static ip=no, if your using a crossover be sure to setup a static ip = yes and give it an ip different than your pc and setup the same gateway and subnet as your pc has or leave it at the default) also be sure to have these setup as follows:


After you get the evox.ini settings setup to your configuration, we will want to create an Xbox image of the folder using either gdfimage, isomaker, or xiso.


Finally, we will want to burn the xbox image we created to disk using Nero Burning Rom, Alcohol 120% or any burning program capable of burning .iso files. Be sure to burn to a CD-RW, most xbox's will not read a CD-R (however, you could burn it to a dvd-r/rw or dvd+r/+rw, but stick with cd-rw at first)


Boot the CD-RW and enjoy! 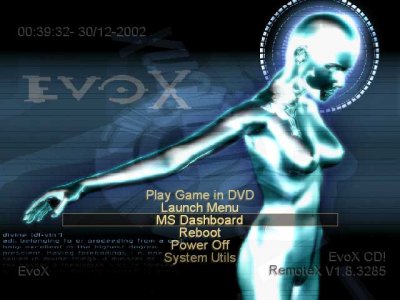 Put your boot cd in and power up the xbox and hopefully you will get an evolution x dashboard. More to come soon!