Recent headlines | Right now: WhatsApp photo sending is down - for everybody
AfterDawn > News > 3G phone with e-book reader and 5 inch screen to be available this year 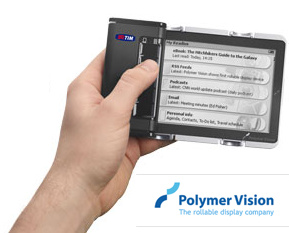 A Dutch company called Polymer Vision hopes to make a big splash this year with the introduction of their new Readius, a 3G mobile phone with a 5 inch display that folds into the device when not in use. The technology that makes this possible is called the Rollable Screen, which involves a display that can literally be rolled up to fit into the device.
In addition to being a phone, the Readius will also be an e-book reader, using the same E-Ink material for its display as the Amazon Kindle, a reader introduced last year by Amazon.com which has no phone functionality. E-ink is primarily notable for appearing very similar to paper, including it's reflective properties. For this reason it makes a superior display for reading from. It's also capable of retaining an image without requiring any electricity, resulting in devices that are more energy efficient than those using conventional LCD displays.

"You get the large display of e-reading, the super battery life of e-reading, and the high-end connectivity ... and the form factor and weight of a mobile phone," said Karl McGoldrick, chief executive of the company, in which electronics giant Phillips has a 25% stake.

Polymer Vision has announced that the Readius will be available some time near the middle of 2008. As of this time no price has been set.
Tweet
<Canadian Privacy Minister expresses concern over copyright amendments >Blu-ray players sell almost 13:1 against HD DVD
Previous Next

they can keep it.

they had phones like that in "Earth Final Conflict"...

Originally posted by tefarko: they had phones like that in "Earth Final Conflict"...

I have been waiting for a phone like this. I am sure the first, maybe second generation wave of these kinds of phone will not be that good, but it is a start to some pretty cool phones. More energy effient means more talk and standby time.
622.1.2008 11:12
vinny13
Inactive

They are just trying to hit Kindle and iPhone with one stone but because of its design its sure to be a flop.

They are just trying to hit Kindle and iPhone with one stone but because of its design its sure to be a flop.
Sachin Dhall

This this is so cool its a must. in 3 years it will be a color. color screen and you can watch a movie on it. Think about it rss feed live how cool is that on your phone easy to read I want it now

I would have to agree. it is good idea but design needs major change.
Comments have been disabled for this article.