Microsoft revealed at its E3 Press Conference today that the Kinect motion-control system will be launched on November 4, 2010 in North America. The company demoed using the controller-free user interface for Xbox Live content, including using sound as well as motion as controls. No price details were given yet.
The Xbox console can recognize and sign in a user that simply waves at it. An additional wave launches the Kinect Menu. The Kinect Menu is populated by Kinect Adventures, Netflix, Zune, Facebook, Friends, Avatar Editor and Last.FM.

Using hand controls, a user can select a movie to watch on the Xbox 360, and also use his/her hands to drag a bar to seek through the video content. Simply saying "Xbox: Pause", will pause the video, while "Xbox: Play" will resume it. "Xbox: Stop", will exit the video and go back to the menu. 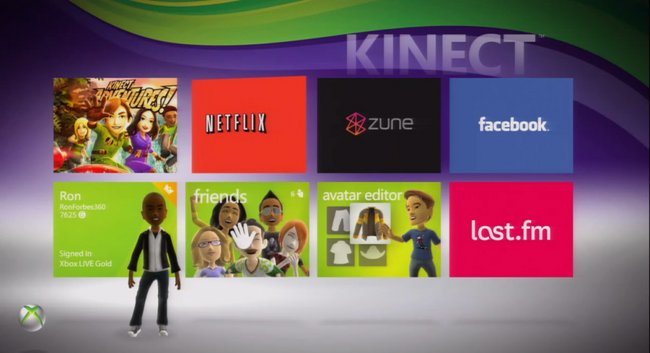 Just as with movies, you can use your voice and hands to control music content, instructing the Xbox to play music and then using hand movements to go back and forth between tracks or albums. Microsoft's goals is to make all of your entertainment needs controller-free, not just gaming.

Using Xbox Live, Video Kinect was shown where two ladies had a brief conversation and showed off some of its features. First thing to note is that the Kinect camera will move the focus of the camera as you move around a room, always keeping you in view if possible. An included mic means there is no need for a headset to be used.

Two people on video chat can watch the same video content too, including News, Sports, TV, Movies and Music content. You can use video chat for other Kinect users through Xbox Live, or users connected through Windows Live Messenger. Saying "Xbox: End Chat" will exit the video conference. 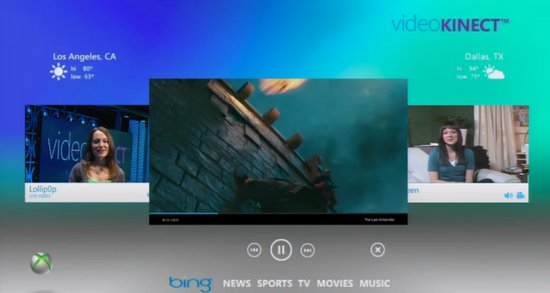 Games using Kinect were demonstrated at the press conference. Kinectimals allows users to interact with onscreen animals, playing or performing tricks. A young girl interacted with an onscreen tiger (Skittles) as a demonstration, getting it to perform tricks like jumping, playing dead and jumping rope using voice and motion commands. One particularly entertaining moment was the animal performing a matrix-style slow motion flip over the rope.

The title includes 40 different animals. Kinect Sports was demoed next, where two gamers ran in place and jumped into the air to get over on-screen hurdles. Bowling, Volleyball, Javelin, Boxing, Ping Pong and other activities were also shown on screen, but not demoed.

Kinect Joyride was demoed next. The Kart racing game requires the user to use an imaginary steering wheel to control, allowing the user to drift by leaning and thrusting to either side, or push forward for a turbo boost. 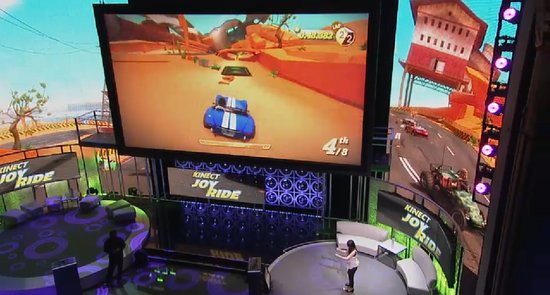 Following Kinect Joyride was Kinect Adventures, which requires your entire body to play. In one demo from the title, the demonstrator's avatar was on a moving platform and he had to duck and move from side to side to avoid objects coming for him. When his friend came to join in the game, Kinect recognized him, loaded his avatar in and split the screen automatically.

Another part of the game was a rafting activity where the two demonstrators had to lean to move the raft in a desired direction. There are 20 adventures to choose from in the title. 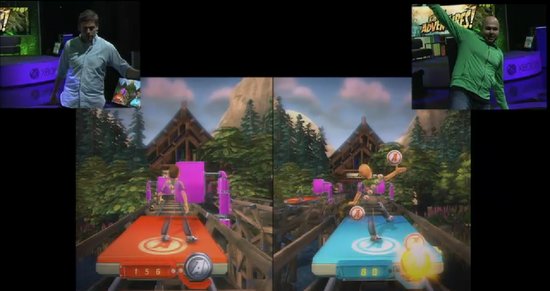 Now, if one of your hopes for Kinect was to help you lose a few lbs, it is coming with its own fitness game. Your Shape: Fitness Evolved was demonstrated on-stage by a lady as the game scanned her body to calibrate. The game creates a gym around the user's virtual character, and displays a model character for you to work out with. It informs you if you are performing an exercise incorrectly.

One fun looking part of the title was Combat Training, where you smash up blocks that are around your virtual character. A Yoga feature in the program also overlays a model of bones in the virtual player's body to show how the body is moving.

Harmonix was up next, demonstrating Dance Central. Virtual dancers take center stage on the screen while movement instructions are there for the user to follow along. Each move the user makes is shown in real time in a small image on the right of the screen. Extra music will become available to download for the title after the launch.

A "Break it Down" mode teaches a player each routine, as Harmonix says it designed the game so that anyone can play, even though for many people, the thought of even trying to dance is intimidating. 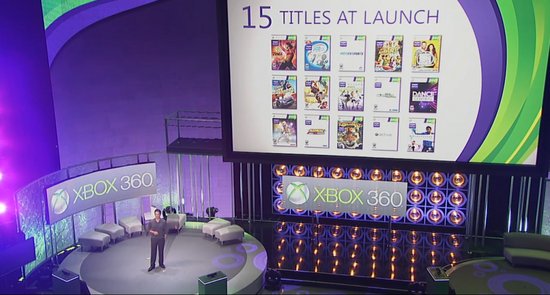 One very impressive teaser was the ability to examine a virtual car right down to the smallest details. For example, you can touch the headlights to see a video about the headlights, or open the door, get in and examine the interior. 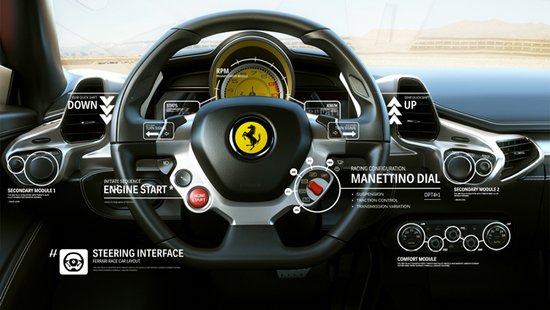 So 360 has finally finished ripping off all of Nintendo's ideas...

A fitness game.
Avatars that represents yourself.
A dancing game.

Gee, I wonder where I've heard this from.

Originally posted by kikzm33z: A fitness game.
Avatars that represents yourself.
A dancing game.

Gee, I wonder where I've heard this from.

Makes me wonder if Nintendo didn't do it first would we have ever seen it in another console. Microsoft and Sony along with their fanboys called it a gimmick and while many of the titles on the Wii are gimmicky and pointless there are some that make pretty darn good use of the motion control.

Originally posted by bobiroc: Makes me wonder if Nintendo didn't do it first would we have ever seen it in another console.

Nintendo was copying Atari; they were not even the second major console.

With a bit of luck, this will all fizzle out in a few months and they can get to trying to make quality storylines, rather than gimmicky accessories.
516.6.2010 08:56
mikeg730
Send private message to this user
Newbie

Originally posted by SProdigy: So 360 has finally finished ripping off all of Nintendo's ideas...

Lets be fair here, The ORIGINAL NATAL hardware was pitched to the top Nintendo executives years ago. They passed on it saying that Nintendo didn't think it was ready for that big of a leap at that point and they also wanted to keep their next system (Wii)at a lower price. They did sell like hotcakes (it was the lowest cost for any game console). It was fun to play but, I think some of the graphics were/are N64 quality. Microsoft have been working on this for over 10 years now. Some of the features(like voice commnds) were used in car audio (see link below) systems.http://www.engadget.com/2007/05/25/microsoft-patent-details-in-car-stereo-with-docking-station/
Then, they bought some of the tech patents to enhance the product they were building from the ground up. Take a closer look at Sony's "Move". Now THAT is more of a "rip-off" (as you said). It uses the same type of approach as Wii by holding 2 controllers in your hands PLUS you must purchase the camera (PS Eye) to play it. Want a 2nd player? You'll have to buy another set of PS Move controls. I love 360 and Ps3, this should mean better games for us all. Please reply and let me know what you think of my comment.
Comments have been disabled for this article.