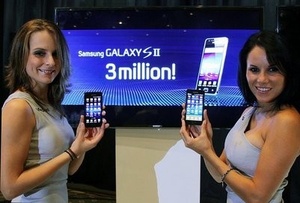 Samsung has announced today that the Galaxy S II is the hottest smartphone in the world, hitting 3 million units sold in just 55 days.
Making the number much more impressive is that fact that the device has not even reached U.S. shores yet, with expected launch date sometime in August.

At 3 million in 55 days, the sales eclipse the original Galaxy's 85 days for the milestone.

The phone is also Samsung's fastest selling phone, ever.

When the device hits the U.S., it will sell as the Samsung Function on Verizon, the Within on Sprint and the Attain on AT&T. There is no word on a T-Mobile release, yet.

Yep, my brother got one in the UK. a whole bunch of people I know got it here in India. Awesome phone! I will wait for the price to drop.

Live Free or Die.
The rule above all the rules is: Survive !
Capitalism: Funnel most of the $$$ to the already rich.
34.7.2011 06:27
ZeusAV
Send private message to this user
Member

Don't know why it's taking them forever to release here in the States. Samsung must want to go head to head with the iPhone 5.

I don't mean any offense to India or anything...but WTF? I know they are a viable market, but the US market is a lot hungrier for pointless tech like this. Two months on the market with no release, I hope HTC or Motorola release some new model on the same weekend as Samsung releases this thing, thus killing any US sales they might have gotten.