According to the latest figures from research firm ComScore, Android and iOS have once again gained U.S. market share at the expense of RIM.
For the three months ended May 2011, Android jumped 5.1 points to 38.1 percent while Apple took a smaller gain of 1.2 points to 26.6 percent share.

RIM, following the trend of the last three years, saw another large decline, this time of 4.2 points to 24.7 percent.

Microsoft, 6 months after the launch of its Windows Phone 7 OS, lost significant share, as well, down 1.9 points to just 5.8 percent.

U.S. smartphone ownership in itself grew by 11 percent, to 78.6 million owners. 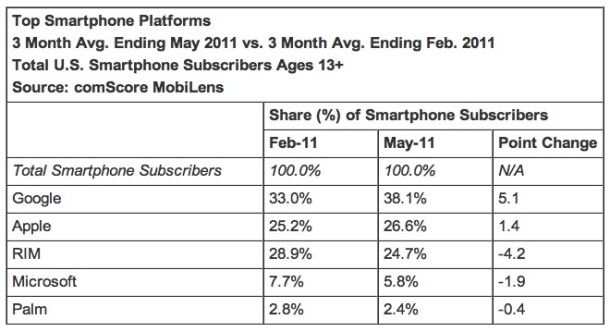