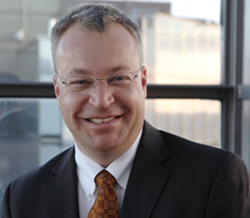 In an interview last week, Nokia's CEO seemed more interested in sowing the seeds of uncertainty about Android than explaining exactly why his company's decision to back Windows Phone makes sense.
Stephen Elop, who has also held prominent executive positions with Macromedia, Juniper Networks & Microsoft, told a Chinese interviewer Google's acquisition of Motorola Mobility, "creates a great deal of uncertainty for the Android ecosystem that I'm sure is of great concern to many of the Android participants."

While it's true Android manufacturers like Samsung and HTC are concerned about Google's decision to buy Motorola Mobility, so far Google appears to remain a good partner. If anything, Microsoft's apparent preferential treatment of Nokia seems like more of a barrier for those companies than anything Google has done.

He repeatedly emphasized the Motorola acquisition as a key to Nokia regaining their previous market position, saying:

I think particularly with the uncertainty around Android created by the Motorola acquisition and so forth, it's clear that the formation of the Windows Phone ecosystem as another ecosystem that can compete - in large part because Nokia made a commitment to that ecosystem - I think it's the case that some of those other vendors are now in a position where they also have options in terms of how to balance their efforts, which I think is good for the industry and certainly good for Nokia.

Unfortunately for Elop and Nokia it appears Samsung, arguably the hottest smartphone vendor after Apple, may be exercising their option to abandon Windows Phone entirely after next year, a rumor that surfaced on Twitter Saturday.

This might make Elop happy given Apple's unprecedented legal campaign against Samsung devices and a reasonable fear i could spill over into the Windows Phone world.

At the same time, if Windows Phone manages to be anywhere near as successful as he predicts it would likely result Nokia becoming public enemy number two for Apple's patent lawyers.

But will Nokia's phones actually help make the Windows Phone platform successful? Based on Elop's statements, they plan to concentrate more on making Nokia phones unique rather than focusing on Windows Phone itself:

We are contributing services and a development of cloud based services to support Windows Phone. Some of those things will be available to everybody, but some of them will be uniquely for Nokia, and those things that are uniquely for Nokia that we do will no doubt be things that we can use to differentiate from the other Windows Phone players as well.

The only rationale he gave for Nokia's decision not to make Android phones was being, "organized around the people," rather than around applications. He cited a greater, "opportunity to differentiate."

Considering the trend in Android phones of customizizing every part of the interface, that seems like a weak argument. Android phones typically come highly customized from the manufacturer, including everything from the home screen to proprietary core apps.

Nokia's Windows phones, according to Elop, will be rolled out gradually in various countries later this year. But who exactly does he expect to sell them to?

He seems to think existing Nokia customers are still their core market, but that ship may have already sailed. In the last year Nokia's position as the dominant mobile phone and smartphone vendor in western Europe has been hit hard by the iPhone and Android.

Certainly, Elop's confidence, apparently based on Nokia's former glory and unproven assumptions about Android, seems optimistic to say the least.

Considering Nokia's continued efforts on the the competing MeeGo platform, apparently they aren't completely sold on Windows Phone either.

Watch the entire interview below.

HAHA GENERALIST CANT BE BIASED AND THIS PARTICULAR POST IS COMPLETELY BIASED.....AUTHOR IS TRYING TO WRITEOFF TWO OF THE MOST MIGHTEST CORPORATIONS OF TECH FIELD EVER AND HOW CAN YOU FORGET WITH SUCH A STRONG BRAND NAME ...WHO KNOW A BIG TURN AROUND STORY IS WAITING FOR THE WORLD [EXAMPLE WILL COME FROM Q3 RESULT FROM ASIAN COUNTRIES ...EUROPE IN NOT WORLD AND THERE ARE CERTAINLY PEOPLE WAITING FOR A GREAT NOKIA PHONE .....HOPE YOU TO BE MORE CRITICAL THEN BIASED ....lOVE YOU Nokia ..!

no matter what he says he is committed nokia to one certain thing....slow and painful death..

Stephen is ex-Microsoft and holds Ms shares.
Bad for Nokia & sad for Nokia fans.
He will leave suddenly after the "work is finished"
Nokia should improve the form factor (large screen, LxW proportion, etc)
Samsung had multi platform - Android (galaxy), Windows (Omnia), Bada (Wave) and we all know which sells the most