Recent headlines | Now it pretty sure: Windows 11 will replace Windows 10, Win10 support will end in 2025 1
AfterDawn > News > Will Samsung's patent deal with Microsoft protect them from Apple?

Will Samsung's patent deal with Microsoft protect them from Apple? 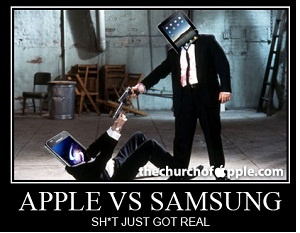 According to a Samsung representative, Samsung's decision to enter into a patent licensing deal with Microsoft was intended to protect them from Apple.
The deal, announced yesterday, gives Microsoft and Samsung each access to the other's patents. It was accompanied by a commitment from Samsung to continue producing Windows Phone handsets.

An unnamed source within Samsung explained the company's concerns to the Korea Times, saying, "Samsung knows it can't rely on Google. We've decided to address Android IP issues on our own."

Google has made a push recently to increase their patent pool in an effort to defend Android from patent claims, including a recent agreement to purchase Motorola's phone division for $12.5 billion. But that hasn't stemmed the tide of patent infringement lawsuits, particularly from Apple.

Samsung's deal with Microsoft, as well as a new initiative to develop a separate Linux-based mobile OS with Intel, seem to indicate how fragile the relationship between Google and handset makers might be.

Since losing a bid to buy Nortel patents to a consortium which includes Apple, Microsoft, and Sony, Google has been criticized for not supporting the Android ecosystem. Their decision to buy Motorola Mobility, putting them in direct competition with their partners, likely hasn't helped.

As one of the biggest electronic components providers in the world, Samsung's interests don't line up particularly well with Google's either. Defending themselves against patent lawsuits isn't the only cost to Samsung in their battle with Apple.

At the start of their worldwide patent war, earlier this year, Samsung was a major supplier of components for Apple devices. The legal fight has put a strain on relationships between the two companies.
Tweet
Tags: Samsung Apple Microsoft Google Patents
<New Visa Android app offers person to person money transfers >Google+ traffic surges as it opens to the public but can they sustain it?
Previous Next

This might be Microsoft's only (last) chance (again) of succeeding with WP7, it's clear that WP7 device manufactures (HTC, Samsung, etc) don't give a s**t about WP7, just look at the hardware compared to current android phones. The more competition the better for the consumer.

this is good to hear this!