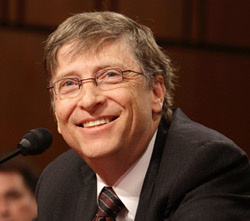 Bill Gates is expected to be testifying in another antitrust lawsuit against Microsoft over Windows. Although the lawsuit filed by Novell only dates back to 2004, the allegations go all the way back to the mid-1990s.
In their suit, Novell accuses Microsoft of deliberately misleading competing software vendors to reduce the competition for software on computers running Windows 95 and then pressuring OEMs to bundle Microsoft Office, rather than WordPerfect, with new computers.

Specifically, they say Microsoft conspired to kill the WordPerfect productivity software Novell had purchased for nearly a billion dollars. Less than than 2 years after buying it, Novell sold WordPerfect to Corel in 1996 for just over $100 million.

In his opening statement yesterday, Novell lawyer Jeff Johnson cited a number of Microsoft emails about Windows 95 development, including some from Gates, and alleged, "Microsoft seriously crippled Novell's ability to produce a competitive product in a timely manner."

He said he plans to ask Gates for an explanation of those development decisions, which Novell claims resulted in the loss of several hundred million dollars on WordPerfect and its companion spreadsheet software, Quattro Pro.

But Microsoft Attorney David Tulchin painted a very different picture. "These products were in decline all the way along," he said, "and Novell made it more so with its decisions."
Tweet
Tags: Windows Microsoft Lawsuit antitrust Novell
<PlayStation Vita gets set NA, EU release dates >Microsoft CEO finds Android confusing
Previous Next

I used wordperfect back in the day and I would agree with Micro$oft, it was on the downhill run even then. I thought it was a dead product until a few minutes ago. Corel+wordperfect=gone (almost), Corel+Winzip = ?? Never really like that one either.