Apple iPad would have used Atom processor but Intel was too slow, inflexible 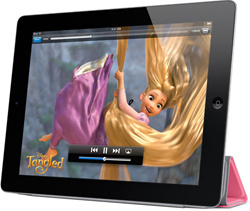 According to the Steve Jobs biography the Apple iPad was initially slated to run on an Intel Atom processor before execs convinced the former CEO that ARM SoC would work better.
Jobs and Jonathan Ive, the VP of Industrial Design at Apple and one of Job's best friends, began development on the tablet in 2004, filing for patent applications and creating sketches of the multi-touch-based iOS. How the tablet would be powered was very much up for discussion, however.

In 2005, Apple made the move to Intel x86 chips in its Mac computers and the company had a good working relationship with Intel. Jobs expected to use the Atom processors in its upcoming iPad tablets.

In 2008, however, the company purchased PA Semi, who was creating the SoC for the iPhones. Jobs was very satisfied with the chips and later would say that Intel "too slow and not too flexible" to create something for the iOS devices.

At the high-performance end, Intel is the best. They build the fastest chip, if you don't care about the power and cost. But they build just the processor on one chip, so it takes a lot of other parts. Our A4 has the processor and the graphics, mobile operating system, and memory control all in one chip. We tried to help Intel, but they do not listen much. We have been telling them for years that their graphics suck. Every quarter we schedule a meeting with me and our top three guys and Paul Otellini. At the beginning, we were doing wonderful things together. They wanted this big joint project to do chips for future iPhones. There were two reasons we did not go with them. One was that they are just really slow. They are like a steamship, not very flexible. We are used to going pretty fast. Second is that we just did not want to teach them everything, which they could go and sell to our competitors.

Same reason they switched to Intel...IBM wasn't willing to put enough effort into advancing the PowerPC for their liking.

Intel graphics do SUCK...they are almost as bad as an iPad or a Mac or something.

He said "Intel was too inflexible"? This from the company who leads the world in being rigid about everything. Must use iTunes to do this or that. Can't have people fiddling with their devices either. It's Apple's way of the highway.