Barnes & Noble to unveil successor to Nook Color next week 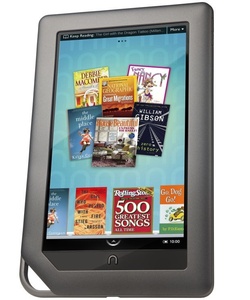 Barnes & Noble is expected to unveil the successor to their Nook Color a week from today, on November 7.
The Nook Color is an Android-based tablet marketed primarily as an eReader. Introduced in October of last year, it became the most popular eReader in the world in the first quarter of this year.

According to Business Week, Barnes & Noble has sent out invitations to a media event next Monday.

While the invitation is short on details, sources inside Barnes & Noble previously told The Digital Reader about a major revamp of their stores intended to showcase more than the current 2 Nook models currently available.

The success of the Nook Color was one of the biggest reasons Amazon decided to enter the tablet market with their Kindle Fire and start taking pre-orders more than a month before it was available.

No doubt it's also the reason they set the Kindle Fire's price at $200, taking a loss on each one sold, but also making it $50 cheaper than the Nook Color.
Tweet
Tags: tablet Nook Color Barnes & Nobles media event announcement
<Ubuntu Linux in the works for smartphones and tablets >HP to sell last TouchPads bundled with PCs through Best Buy
Previous Next
Comments have been disabled for this article.