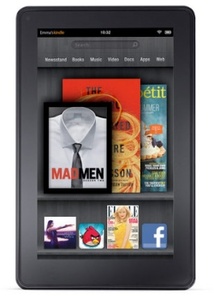 A previous report from IHS had estimated costs at $210.
Research firm IHS iSuppli has done a thorough teardown of the Amazon Kindle Fire and found that the component costs are about $201.70. Amazon sells the device for $199.

By far, the most expensive part was the 7-inch display, which came in at $87 per unit. The displays are LG E-Ink.

To save money, Amazon skipped out on a camera, microphone, microSD card slot, HDMI port and 3G/4G wireless radios.

By comparison, the 16GB iPad 2 has a teardown price of $326 but with a much richer feature set.

Amazon makes its money not on Kindle hardware, but on the paid content and other products it plans to sell the consumer through the Kindle. This is a similar business model to wireless companies such as AT&T or Verizon. They sell you a phone that costs them $400 to $600 or more to make for a price of only $200. However, they expect to more than make up for that loss with a two-year service contract. 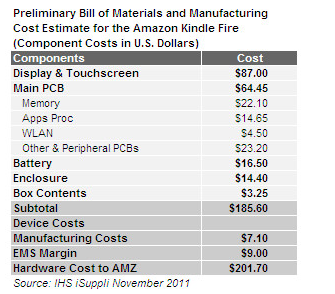 I hope they hurry up and make jailbreaking the fire easier and more worthwhile. It is pretty sweet straight out of the box but would be nice to be able to uninstall some of the trash Amazon decided we had to have and not be limited to what apps they have bothered to declare compatable and add to their store...

Originally posted by dEwMe: By far, the most expensive part was the 7-inch display, which came in at $87 per unit. The displays are LG E-Ink.

Originally posted by dEwMe: By far, the most expensive part was the 7-inch display, which came in at $87 per unit. The displays are LG E-Ink.

Sorry if that was not clear, the displays are made by LG and E-Ink.
AfterDawn News
AfterDawn Guides
One of the largest collections of software on the Web: AfterDawn Software Section
420.11.2011 15:30
Azuran
Send private message to this user
Member

add in overhead and R&D amortized over the life of the device and that gap is probably much bigger.