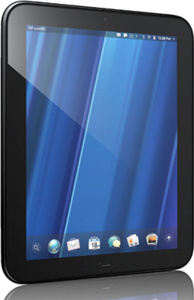 HP is getting ready to make their final push to rid of the last remaining stock of their discontinued TouchPad stock.
After dismal sales of the WebOS based tablet led to HP discontinuing it earlier this year, they went on sale for below cost and quickly sold out. Later, contractual obligations with suppliers led to an additional batch of TouchPads being produced which were offered in bundles with their computers.

This last bunch of TouchPads consists of refurbished units, which TechCrunch reports will be offered at the same $99 and $149 pricepoints via the company's eBay store. They quote an internal HP email which reads:


In an effort to give HP employees first chance at a very limited supply of refurbished TouchPads, there will be a short delay between when the product is posted live for sale on eBay and when the general public is notified of the sale.

Refurbished HP TouchPads, both 16GB and 32GB versions, will be posted for sale through the HP eBay store at: 6:00 p.m. (Central Time), Sunday, December 11th. If you are interested in purchasing a refurbished TouchPad, please make yourself a reminder to log-on to eBay a few minutes before the sale starts to make your purchase.

In addition, the email indicates there will be a limit of two TouchPads per eBay user and an accessory bundle including a case, charging dock, and wireless keyboard will be offered for $79.

While the WebOS operating system which powers the TouchPad appears to be all but dead, and is blamed by many for performance issues on the tablet, a project to port Android to the TouchPad has made significant progress, and reaching alpha status in October.
Tweet
Tags: HP eBay Sale TouchPad refurbished
<Netflix angers more customers with buggy Xbox 360 "upgrade" >Verizon CEO says shared data plans probably coming next year
Previous Next

If they have enough units that needed repairs from such a short sales period, then I am very happy that I don't have one.
HP = Horrible Products

8 out of 10 will have been returned with nothing truly wrong. The rest will be a bit broken.