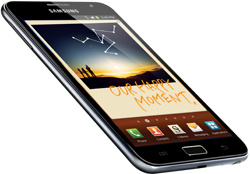 The Galaxy Note may be the most unusual smartphone Samsung has produced, but according to the company that hasn't stopped carriers from ordering 1 million of them already.
The Galaxy Note is hard to classify. With a 5.3 inch display, it seems almost too big to be a phone, but certainly too small to be a real tablet. It is clearly intended to be tablet-like, however, as you can tell from the inclusion of a Wacom stylus.

Although a company statement reprinted in various Korean publications claims 1 million of the Android phones have been sold, a closer reading shows that to be the count of units shipped, rather than sold.

Regardless of how many are actually in consumers' hands, the Galaxy Note has the potential to be something truly unusual - a device that defines a new category. It has a lot of power, with a 1.4GHz dual core Cortex-A9 processor and 1GB RAM. It also offers a minimum of 16GB of internal storage, plus of course up to 32GB more using the microSD slot. Even the display resolution is impressive at 1280x800.

Of course the most interesting feature for some people will be the Wacom-made S Pen. The Galaxy Note ships with Android 2.3.5, which means it lacks a native pen API. Like HTC with the Flyer, Samsung has filled the gap with an API of their own. Whether this multitude of API's will ultimately be a problem for Android remains to be seen.

A video from GSMArena shows the Galaxy Note's stylus in action:

Of course the stylus won't appeal to everyone, especially since the Galaxy Note isn't really big enough to use as a serious digitizer (drawing tablet) solution. Primarily it seems like it would be useful for handwriting, and perhaps most interesting to the old folks among us who remember our ancient Palm PDA's with the original Graffiti - which you can get for Android.

Samsung's statement also notes the Galaxy Note will be available in the US some time next year. In fact, publicly available FCC documents from the end of September already show an AT&T version being approved.

Although it didn't make an appearance in the FCC's testing, there is also reason to believe the American version will be slightly different than the one released internationally in November. Pictures obtained by pocketnow.com show what is clearly a Galaxy Note, but with a different button configuration at the bottom.

If the Verizon's price for the Galaxy Nexus is any indication, the Galaxy Note will likely set back AT&T customers at least $300 with a two year contract. For just $250 they sell the Galaxy S II Skyrocket with a 1.5GHz dual core processor. Display resolution would be considerably less, but a lot of people would probably prefer holding the smaller phone.

The real question for the Galaxy Note is whether it can carve out its own niche. It just doesn't seem to fit nicely into any of the existing ones.
Tweet
Tags: Samsung Galaxy Note Wacom stylus
<Google wins a small victory against Oracle as parts of one patent are invalidated >Internet activists take aim at legislators pushing SOPA
Previous Next

It doesn't support T-Mobile's bands though? :(

I really like the idea...if I was not still paying off my last phone, I would be preordering this one once full specs were released (assuming it is 4G). Heck, if they made a 7-inch tablet that could make cell calls, I would want that. I have bluetooth...it doesn't need to be a handset. So long as Seido can figure out a way to make a holster for it, it isn't too big.

Originally posted by Morreale: It doesn't support T-Mobile's bands though? :(

If it is on AT&T then it would work on T-Mobile, although it is hard to say if they will be offering them.

Just like a big iPhone just not as good.

Originally posted by robertmro: Just like a big iPhone just not as good.

When did the iPhone get a stylus and a faster processor? Last I heard Steve Jobs had outlawed even thinking about styluses and the iPhone had an underclocked processor to make the battery last longer. These are not, by the way, criticisms of the iPhone. Lots of people dislike styluses and trading processor performance for battery life is a perfectly reasonable compromise. I'm just pointing out this phone is significantly different from an iPhone, or any other phone for that matter. I am undecided on whether those differences are good or bad.
Rich Fiscus
@Vurbal on Twitter
AfterDawn Staff Writer
54.1.2012 10:56
SoulGLOW
Send private message to this user
Member

I've been waiting for a phone this big and bad