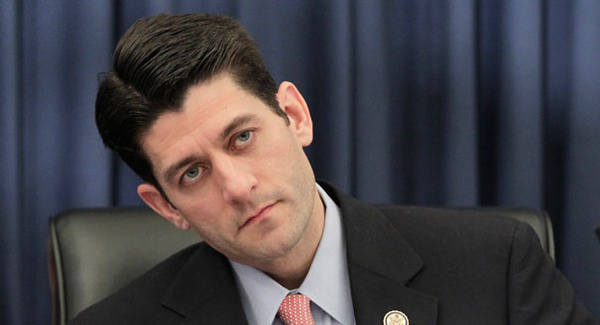 Members of the online community Reddit, often referred to as redditors, have notched another minor victory in the war against SOPA, the widely criticized anti-piracy bill being considered in the US House of Representatives.
Last month redditors were behind a campaign to boycott Internet domain name registrar GoDaddy because of their support for SOPA. When the dust settled, GoDaddy lost a lot of customers and ultimately decided to retract their official support for the bill.

Fresh off that victory, redditors set their sights on unseating a federal legislator. After much debate, which actually involved a number of issues besides SOPA, a target was chosen. That target was Wisconsin Representative Paul Ryan.

Ryan was not one of SOPA's sponsors, and in fact had never made a statement of any kind on the bill before the Reddit campaign started. Today that changed when the following was posted on his official page:


The internet is one of the most magnificent expressions of freedom and free enterprise in history. It should stay that way. While H.R. 3261, the Stop Online Piracy Act, attempts to address a legitimate problem, I believe it creates the precedent and possibility for undue regulation, censorship and legal abuse. I do not support H.R. 3261 in its current form and will oppose the legislation should it come before the full House.

Even more imporant than the question of his former position on SOPA, or whether Reddit's Operation Pull Ryan was a factor in his decision, is the fact Ryan is a very influential figure in Washington, particularly on economic issues. He chairs the House Budget Committee.

Representative Lamar Smith, SOPA's chief sponsor and chairman of the committee where the bill originated, responsded to the news of Ryan's statement, saying:

Had Chairman Ryan read the manager?s amendment, he would have realized that the bill targets only foreign websites dedicated to illegal activity.

Logically, Reddits agenda-driven attack against Representative Ryan had nothing to do with SOPA, in that he never expressed a favor for the bill - nor should he have. Rather, the Newhouse family, through Advance Publications, and Conde Nast, push a form of stealth socialist/ communist ideology to innocent and unwitting consumers.

Reddit is nothing more than an extension of the liberal media.

Mr. Ryan represented what used to be the norm of main stream america, I am all for defeating both of these bills, but I am unclear exactly why he was targeted... Could it be to point out this is more of an issue of left vs. right, or the opposite I am not sure. I do know this, too much power is never a good thing left or right. People need to leave each others business to those involved and not push ideals on anyone. These bills are just another example of abuse of power.

edit: @ Blessedon I totally agree with what you just said. People who actually pay attention to the actions of others know just exactly what is going on, instead these people who are acting like children, are just jumping on the next bandwagon. Things really need to change at the federal level. We need to stop this trickle up poverty before it is to late.

You obviously understand the problem. Thank you and Bless you!

Originally posted by Blessedon: You obviously understand the problem. Thank you and Bless you!

Thank you, It is a real shame, because those who realize the problem are the same people who will fight the "future" war that is being forced down our throats. I know for a fact that, this has been coming for a long time and we have no time to stop it.

I'll stop, because I don't really want to steal the main focus of the original topic at hand. But I am also glad that those who honestly understand the trying times we truly live in.

Thank you Blessedon, and have a great week! May the lord bless you for all time.
Custom Computer rebuild 2.80GHZ@6cores/8GBRAM|3DS | WII|360|PS3|

Hopefully his words will be heard but he may be a salmon swimming upstream.

The internet SHOULD stay free. Anything that is universally shared or participated in equally across the board by EVERYONE on this GOD forsaken planet should remain consistent and free.

Originally posted by Blessedon: Logically, Reddits agenda-driven attack against Representative Ryan had nothing to do with SOPA, in that he never expressed a favor for the bill - nor should he have. Rather, the Newhouse family, through Advance Publications, and Conde Nast, push a form of stealth socialist/ communist ideology to innocent and unwitting consumers.

Reddit is nothing more than an extension of the liberal media.

It has been my observation that when an individual or organization starts to target another it is usually because they are either deathly afraid of either being discovered, have been discovered or are completely inept at whatever their being put in control of, thus they try to draw aim onto another target.

Take for instance a grade school playground. The most obnoxious, loudest, most prolific child that needs to be smacked repeatedly about the head & shoulders is making the most noise. While the one who makes the least amount of noise is in the most control & takes charge of classroom activities when called upon in the classroom.

Argue as you may, it carries over into your adult life just as easily. Granted, Drill SGT Russell does have to make an appearance on occasion simply because brute might over mouth is just going to be the only option. We all know that to be true. But see if in about 75-80% of the other cases if I'm not right.

Simply because Ryan had 'nothing' to say mitigated guilt. Hell, I guess we're all witches now?