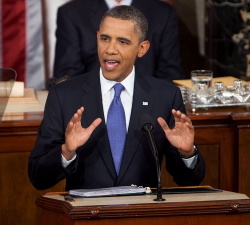 The White House has formally responded to a pair of online petitions against SOPA (the Stop Online Piracy Act).
The petitions were posted to the White House website, using a feature called 'We The People,' which was created for just that purpose. Between them, they have attracted more than 100,000 signatures. While agreeing with many of the sentiments expressed by SOPA's critics, the response seems to whitewash one of SOPA's worst provisions.

It was written by Intellectual Property Enforcement Coordinator Victoria Espinol, whose position was created by a recent anti-piracy law called PRO-IP (not to be confused with PROTECT IP), U.S. Chief Technology Officer Aneesh Chopra, and Cybersecurity Coordinator for National Security Staff Howard Schmidt.

The White House response addresses, in general terms, the issues of censorship and online security. These are the two areas most often cited as concerns by SOPA/PIPA opponents:

Any effort to combat online piracy must guard against the risk of online censorship of lawful activity and must not inhibit innovation by our dynamic businesses large and small. Across the globe, the openness of the Internet is increasingly central to innovation in business, government, and society and it must be protected. To minimize this risk, new legislation must be narrowly targeted only at sites beyond the reach of current U.S. law, cover activity clearly prohibited under existing U.S. laws, and be effectively tailored, with strong due process and focused on criminal activity. Any provision covering Internet intermediaries such as online advertising networks, payment processors, or search engines must be transparent and designed to prevent overly broad private rights of action that could encourage unjustified litigation that could discourage startup businesses and innovative firms from growing.

We must avoid creating new cybersecurity risks or disrupting the underlying architecture of the Internet. Proposed laws must not tamper with the technical architecture of the Internet through manipulation of the Domain Name System (DNS), a foundation of Internet security. Our analysis of the DNS filtering provisions in some proposed legislation suggests that they pose a real risk to cybersecurity and yet leave contraband goods and services accessible online. We must avoid legislation that drives users to dangerous, unreliable DNS servers and puts next-generation security policies, such as the deployment of DNSSEC, at risk.

However, it also promises a commitment to come up with anti-piracy legislation "that provides prosecutors and rights holders new legal tools to combat online piracy originating beyond U.S. borders," before the end of 2012. Additionally, it seems to come out in favor of service providers taking additional measures to deter intellectual property infringement:


We expect and encourage all private parties, including both content creators and Internet platform providers working together, to adopt voluntary measures and best practices to reduce online piracy.

While that may sound like a good goal, it presumes all parties are interested in cooperation for the good of everyone. If anything, it is the companies complaining about IP infringement who are not willing to compromise and insist everyone else is taking advantage of them.

Even when there is cooperation, it is extremely one sided and anti-consumer. For example, just last year some of the biggest ISPs in the US agreed to disconnect customers from the Internet based on allegations from the entertainment industry. Under this arrangement, consumers are presumed guilty unless they can present an affirmative defense, and even then it is an organization chosen by the MPAA, RIAA, and ISPs who decides guilt.

Accused individuals are required to pay a $35 fee to someone they have no voice in choosing just for the privilege of making their case, and only defenses agreed to by the ISPs and RIAA/MPAA are allowed. In addition, while any information submitted to the reviewer disputing an infringement claim is forwarded to the copyright holder, next to nothing nothing the copyright holder submits is available to the accused.

In fact this arrangement appears to be exactly what the letter is talking about. When it was announced last July, Victoria Espinol wrote a post for the official White House blog saying, "we commend them for reaching this agreement."

But perhaps the most troubling part of this announcement is the fact the government is so focused on a solution to a problem they can't even prove exists. Figures from both the government and copyright-related trade groups say things are going great. On the other hand, the numbers used in support of bills like SOPA and PIPA have been long since been discredited.
Tweet
Tags: Obama Administration SOPA anti-piracy bill PIPA petition
<UK judge okays extradition of college student for copyright infringement case >Facebook on pace for 1 billion users by August
Previous Next

The problem with all of these laws is that since they started any of this purported inactment (oh, since the printing press) is that all of them are still REACTIONARY. You can't, won't and NEVER will be the thought police. Not to mention the fact every time someone 'thought' of doing something we'd all be in the houskow (don't know if that's how you say or spell it).

How about each time someone came up with an idea that was crap, then several months/years down the road someone actually makes a silk purse out of a portion of said idea. All of the sudden the originating individual is supposed to get kudos for being a failure? I don't think so. Not to mention some dork that danced around & showed his ass at a dinner party or two to get you to pay attention supposedly get college tuition for his 58th great grand children?

At what melting point of F*k off do we have to get to tell these people go away?

Legitimate blood, sweat & tears (art & literature & equivalent) needs to be protected, there's no disputing that; but where the hell was all this pomp & circumstance when the REAL artists were supposed being represented by the alphabet Nazi's (& the likes) 'before' the consumers started being showered with repeated sales of the exact same songs/books/movies/etc...?

"THEY" did the work and yet we never hear about them celebrating any victories.

i am thinking more and more that there should be an open season on politicians,and this is coming from a canadian.probably have the black suits at my door for that one.lol.by the way russell,thats hoosgow.

Originally posted by aldan: i am thinking more and more that there should be an open season on politicians,and this is coming from a canadian.probably have the black suits at my door for that one.lol.by the way russell,thats hoosgow.

1. Be careful what you write!?! you might have just ended up on a FBI, CIA alphabet soup watch list somewhere! 2. Thanks! I can use all the help I can get...
http://onlyinrussellsworld.blogspot.com
Comments have been disabled for this article.