Recent headlines | Guide: How to Kick Unwanted Guests from Your Netflix Account 1
AfterDawn > News > Woz loves his iPhone, but prefers Android for navigation and voice recognition

Woz loves his iPhone, but prefers Android for navigation and voice recognition 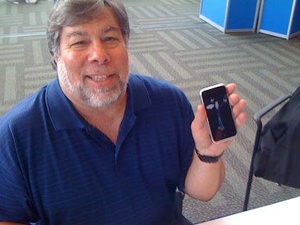 Steve Jobs and Steve Wozniak always made something of an odd pair during the early days of Apple.
In many ways they were opposites, but really they complemented each other in a unique way. Where Jobs was more of an artist, excelling at design and usability, Wozniak, better known as just Woz, was the technical wizard. In fact many people still refer to him as the Wizard of Woz.

Given those differences, perhaps it should come as no surprise that Woz doesn't share his later partner's hatred of Android. In fact he prefers it to his iPhone for a number of everyday tasks.

He's particularly impressed with the Google Maps powered navigation app, and even its voice recognition. In fact, he prefers Android's voice recognition to Apple's Siri, and believes Siri was better before being purchased by Apple.

A few days ago, Woz told The Daily Beast:

Of course, Steve Jobs made no secret of why he hated Android. He felt betrayed by his old friend, former Apple engineer and Android Inc co-founder, Andy Rubin. As head of the mobile team at Google, Rubin was responsible for overhauling Android based on the superior look and feel of the iPhone.

Woz remains friends with Rubin, and has a less passionate perspective on Android, and probably most things, than Jobs. Woz still prefers the iPhone overall, and especially recommends it for people who don't want to invest any extra time getting familiar with their phone.

But he has been using Android for quite a while, and certainly isn't confused by it like Microsoft's Steve Ballmer. He said, "if you?re willing to do the work to understand it a little bit, well I hate to say it, but there?s more available in some ways."

He also doesn't agree with people who compare Android to Windows, based primarily on the way Windows copied and competed with the Mac. Instead he sees Google as a serious competitor with a nice interface, which is very different from how he felt about Windows for a long time.
Tweet
Tags: Android iPhone Siri Woz navigation
<New ReFS file system to debut in Windows 8 >Samsung plans big investment in processors and displays
Previous Next

Originally posted by core2kid: I like my flip phone, and an extra ~$30 a month in my pocket.

I keep 300$ in my pocket every day ;). On a more serious note, smartphones really aren't for everyone. I'm the most technology-interested of my family, but was actually the last to get a smart phone. I really didn't have a need for it until this year entering college. I can't tell you how many times it has come in handy for school related stuff, along with just every day entertainment etc. To people like me the $30 a month is money VERY well spent.