The new iPad's battery gauge is lying to you 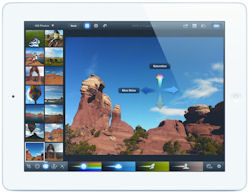 Dr. Raymond Soneira of Displaymate Technologies has reported this week that the new iPad's battery gauge is lying when it says "100 percent."
The new iPad holds a significantly larger battery than its predecessor, the iPad 2, and therefore requires many more hours to charge than previous generations.

Soneira says: "I measured the power actually drawn by the AC adapter and found that the new iPad continues to charge for up to 1 hour after it claims to reach 100%. This affects the battery run time if you stop charging when it says 100%."

As stated, if you want full capacity from your new iPad battery, you will need to keep charging the battery for another hour after it says "100 percent" in the meter.

The iPad is certainly not the first device to have a battery gauge which lies but it is likely the most high profile. Apple could potentially fix the issue in future firmware updates.
Tweet
Tags: Apple battery iPad
<Rovio says 'Angry Birds Space' not headed to Windows Phone for now >Facebook is against employers asking for login details
Previous Next

No problem.I made my own charger with some 1000 amp diodes and connected them to a lightening rod. It only takes 2 microseconds to give me a full charge.Who needs a stinking AC adapter.

What is the PIV of these diodes?

Either a bad joke that nobody will understand unless you are a techie. Other then that you are full of it.

Sounds like you've been eating sour grapes all your life the way you talk to people.
You always talk down to everyone like you are better than them.
I guess that's why Paul McCartney lives in the USA to get away from people like you.

Sorry you feel sub-human.
Not my problem.

I have a satirical point of view on life which keeps things interesting.

I also maybe old enough to be your Grand dad.

Well I doubt if your old enough to be my Grand dad since I'm 65 years old. I've had two heart attacks now and been diagnosed with cancer.I am just trying to spend what time I have left trying to help other people.I read your whole post but I didn't know what J/K stood for.Just to let you know I don't have any hard feelings so have a good day.

Join the club guy.
I have liver cancer that was knocked out for now via chemoembolization. Which means I still have cancer but it is in check.

Now I have a cancerous lung.

I was on the liver transplant list. Now with having cancer somewhere else... Off the list. Rule of thumb is, I you develop cancer in any other organ we can't do anything for you. (Stanford U)More often, the cancer spreads to the pancreas. Not in my case. Like I said it doesn't matter what part of the you develop cancer in. With all the Vets who have come back from war that have Hep-c...... Hep-c in an epidemic you hear little about. It's always woman's breast and cervical cancer that gets all the media hype.

Yes I have Hep-C but I'll be damned if I know how I got it. Never an IV user. Only had a Tat at Lyle Tuttle in SF CA when I was 16.

Too many patients, too few livers to go around. That's the way life goes.

Let me tell you something.... No pity-pot for me. All the health problems I have are caused by me.

When you are young you feel invincible. Then when you get to be 57 as I am, all the nifty things you did when you were young come back to bite your ass.

Hope your heath issues can be worked out.


Cars, Guitars & Radiation.
Comments have been disabled for this article.