Recent headlines | Guide: How to Kick Unwanted Guests from Your Netflix Account 1
AfterDawn > News > Paramount Pictures identifies 5 'rogue' cyberlockers that should be shut down

Paramount Pictures identifies 5 'rogue' cyberlockers that should be shut down 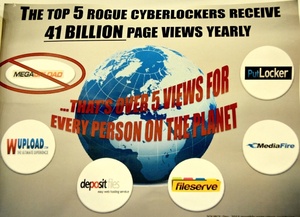 Just months after the shut down of the world's top cyberlocker Megaupload, Paramount Picture's has sent the MPAA and U.S. DOJ a list of 5 "rogue" file-sharing sites that should be shut down next.
The lucky handful are Fileserve, MediaFire, Wupload, Putlocker and Depositfiles.

Sites like Fileserve and Filesonic (which did not make the list) almost immediately shut down their affiliate programs and sharing capabilities after the raid on Megaupload and other lockers cut off access to U.S. visitors.

The MPAA defines a rogue cyberlocker as such: "Rogue cyberlockers aren't just distribution hubs for stolen movies and TV shows - both the users who upload content and the operators who run the sites can earn money from doing so. As Internet video traffic grows, the threat from rogue cyberlockers that profit from stolen content is rising rapidly."

Paramount says the 5 cyberlockers in question receive a massive 41 billion page views every year and are "criminal" in nature. Each of the sites have been referred to the Department of Justice but it is unlikely that any action can be taken until the government can get through its case against Megaupload.
Tweet
Tags: MPAA Cyberlocker Paramount Pictures rogue
<Smartphone makers killing off Chinese 'white-box' sellers >Nokia Lumia 900 goes up for pre-order
Previous Next

Sounds like what the movie studios are doing is criminal in and of itself.....RICO statute anyone???

They are just going to keep going after them now,Megaup was the gateway drug!!

So I guess if your site is really popular, then it *must* be criminal in nature. This sounds like guilt by association, with a little bit of FUD and fear mongering thrown in for good measure. It's funny how they don't mention the reasons behind their conclusions other then it looks suspicious they get alot of page views. So I guess, corporations are people too, and are afforded the same rights as people, only when it's convenient. Did I leave anything out, MPAA?

Seems to me, not so long ago, if your studio had a particular star acting in a movie then the said movie, studio & the whole production was instantaneously panned as being trash before it ever hit the screen. Movie houses wouldn't even book from certain studios for that very reason. Are we to now believe the same stereotype bravado Paramount is using here?

Where's the proof? What barometer are they using as a guide for their insinuations? There's blood in the water & they're in a feeding frenzy, that's all. It's like a tainted cop or a war torn soldier who sees nothing but a lying public or combatant around every corner. These a*holes see nothing but pirates & thieves as well as mindless sheep with bottomless wallets as well.

If this is what the studio has become after 100+ years, then they desperately need to pull the plug on this well aspirated Alzheimer, ranting Nazi, Rob Zombi nightmare they have become.

the operators of these (so called) rogue sites need to take there billions of dollars spend it on gifts for there friends and family (or give some to charity) and get rid of all the extra cash so they cant lose it.

Originally posted by xboxdvl2: the operators of these (so called) rogue sites need to take there billions of dollars spend it on gifts for there friends and family (or give some to charity) and get rid of all the extra cash so they cant lose it.

-or start spreading the grease into PAC's and SuperPACS, after all, US legislators enabled these practices so that they could be legally bribed.

So much for ever finding an outdated driver, old system files no one has discs for anymore, or just simple perfectly legal files I have to hunt and search for on a regular basis.

If they are so concerned there is an extremely easy solution. Do not release any DVD or Blue ray or streaming versions of these movies. If their movies were SOOOOOO great people will make time & shell out $ 10 - 15 per head to watch !!!!!

the dont care about stopping piracy they care about money.they dont go after sites that are poor.