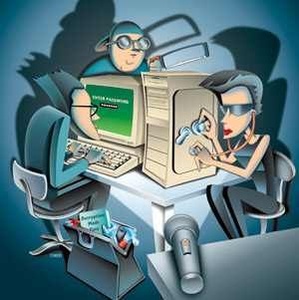 Felix Roque, the mayor of West New York in New Jersey, has been arrested after hacking a site that was calling for a recall on his election.
Roque allegedly had his son Joseph hack the site and then threaten the creator. Both have been arrested.

Started in February, the recallroque.com site was created by other Hudson County government officials.

Joseph Roque conducted Google searches for "hacking a Go Daddy site," "recallroque log-in," and "html hacking tutorial" and was finally able to gain control of the account. On February 8th, the wanna-be hacker cancelled the domain name and killed off the site.

The very next day, Mayor Rogue called the owner of the site, claimed that he knew the man was responsible for the site and also said he had "a friend in high level of government who had shut the Recall Website down." The Mayor then threatened that "everyone would pay for getting involved against him."

Does anyone else find it utterly creepy, that it was so easy to tie internet searches to an individual?

Yes, there are definitely legitimate uses for this (this article is a good example) but... Meh. I do NOT trust our government to use this capability wisely.

Originally posted by Bozobub: Does anyone else find it utterly creepy, that it was so easy to tie internet searches to an individual?

Yes, there are definitely legitimate uses for this (this article is a good example) but... Meh. I do NOT trust our government to use this capability wisely.


The article doesn't specify how they know the son made those search queries. My assumption was that they had just searched the suspects' computers. Then it would be as simple as looking through their browser's history to see what they'd been looking at, assuming they didn't bother to cover their tracks.

Like I said, the article doesn't specify though. The nature of the search queries listed above leads me to believe these guys were not exactly hard core hackers, and that the site they brought down was even less bright. :-P
What happens when Microsoft buys Minecraft? Lets see...
326.5.2012 12:31
LordRuss
Send private message to this user
Senior Member

Convenient that the outgoing mayor almost seems to be named after his own behavior... Then the irony that his political behavior contradicts the general ideology of the entire legislative body who seemingly damns the rest of us from doing the same.

Not that the bulk of our society is behaving badly... or that he is getting away with anything; yet. We'll see what his money will buy him out of. And still, However, none of us are guilt free of anything. You know, "cast the first stone" & all that some such shit...

It seems to me this is just another case of our society producing whiners & piss poor losers again. Roque should take his lumps, get his paper hat & start his 9-5 like the rest of us, because this little stunt sure brought his political career to a screeching halt.

Another fine example from a stellar politician that says one thing an does another, which makes many of even more cynical about out elected leaders.

"Do not underestimate the power of an enemy, no matter how great or small, to rise against you another day." - Atilla
528.5.2012 15:52
xaznboitx
Send private message to this user
Senior Member

what a dumb ass... he shouldn't be mayor no more... way to get your son in trouble with your dumb ass as well

He is about as bright as the former Governor of Illinois Rod Blagojevich who's dumb ass is in prison along with half of the previous politicians.

Regardless of all other factors this action alone would justify the mayor's recall !