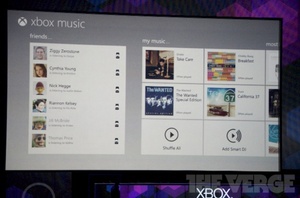 As expected, Microsoft has unveiled their Xbox Music service today during E3.
The service will be made available to Xbox 360, Windows 8 and Windows Phone users later in the year.

As is their new ecosystem standard, the service will use the Metro interface, and include a social networking aspect to see what friends are listening to.

Furthermore, Microsoft has kept the Zune Smart DJ feature from years past. The entire library of music will be over 30 million tracks.

Although not expressly saying it, the service will also be available on iOS, Android, and on desktops, as well.

PS3
PROS: You can dump mp3s on the HDD, although deleting them in bulk takes way too long. Inclusion of album cover art. Nice looking visuals (The Earth).
CONS: NO NOW PLAYING LIST! It amazes me why this still hasen't been fixed. You have a screen telling you what song is playing. What song is coming up next? What if you want to add a song to the Now Playing List? You have to build a playlist first every time and even then, you cannot go to a specific song and play it from the playlist. Just stupid.

As for this xbox music....WTH is it? That video gave no info whatsoever.