Sotheby's has auctioned off a functioning Apple 1 computer, alongside a memo written by Steve Jobs during his time at Atari.
The computer sold for double the estimate, reaching $374,500. The memo sold for $27,500, also much higher than expected.

In total, there were about 200 Apple 1s ever created, as each was hand-built by co-founder Steve Wozniak. The fully assembled circuit board cost $666.66 when they originally sold in 1976. The Woz chose the number because "it was easier to type."

There are only 50 the boards expected to still be in existence, with much less actually functioning.

Job's four-page note was written in 1974 and included his thoughts on how to improve its arcade football game "World Cup." 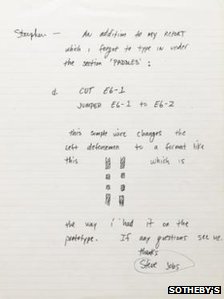 An first edition New Testament signed by the Twelve Apostles got no bids...

Functions with the same capabilities as current Apple products!

be nice if we could read the memo

Originally posted by Notcow: Functions with the same capabilities as current Apple products!

Not really. Its a general purpose computing device without any DRM or similar restrictions built in, so its immensely more powerful than current Apple products.
Comments have been disabled for this article.