Vizio looks to own Google TV market with the 'Co-Star' 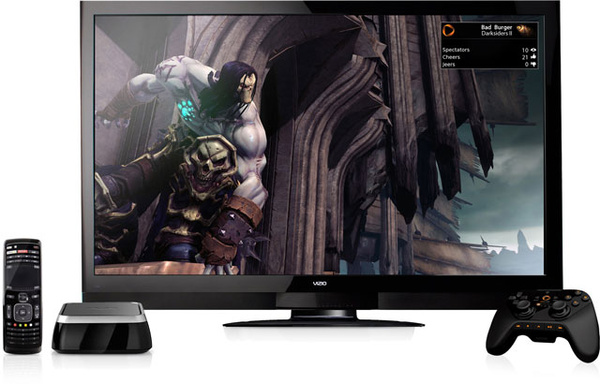 Vizio has introduced their first entry into the Google TV market, at a price that will likely crush the competition.
The $99 Co-Star will also be the first Google TV device to have built-in OnLive support, allowing for cloud-based gaming.

On top the standard Google TV features, the gadget will have pre-loaded Netflix, Amazon Instant Video, iHeartRadio, and OnLive apps.

"Our focus to deliver the best consumer experience continues with today's announcement of the Co-Star, which delivers a superior smart TV interface that anyone can add to their existing HDTV," Matt McRae, VIZIO's Chief Technology Officer said in a released statement. "We combined the powerful features of Google TV with an intuitive and easy to use interface, giving users the power to enjoy an entire world of entertainment."

The Co-Star will come with a dual-sided Bluetooth remote, with one side being a full QWERTY keypad. The set-top has 802.11n Wi-Fi and USB ports.

Sounds pretty neat...and unlike their other products, it probably won't ship with green lines down the center. Can't wait to see the hacks.

I want to see someone develop an out-of-market app that does DVR. I know Google would not let someone develop one and post it in the market, but since we can install from individual apks than it should work

It probably would not work. I would imagine that the copy protection is hardwired.
But I hope I'm mistaken. The ability to digitally record from an HDMI cable onto a HD would be "the" killer app!

There are things out there that strip the HDMI protection but they are very expensive (HDCP Strippers). The best thing would be to record through the composite connection, as most satellite and cable companies do not broadcast in full 1080p. The only thing you would lose is the 3D channels if you have them, I don't think you can do 3D over an analog connection.

Perhaps Vizio will give Roku a run for its money? Competition delivers innovation, and innovation provides more productivity for consumers. Can't wait too see what they produce next!!