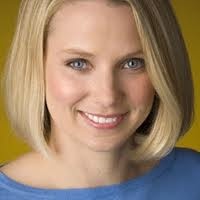 Yahoo has named Marissa Mayer their new CEO, snatching away one of Google's top executives.
Mayer will be the fifth CEO for the company in as many years, succeeding the interim chief Ross Levinsohn. Levinsohn took over for Scott Thompson this year, who was fired over resume inaccuracies after a high-profile hiring following the firing of Carol Bartz.

During her time at Google, Mayer became a well-known personality, and will now be one of the most powerful women in Silicon Valley. Mayer was part of the team that designed the "look and feel" of Google search, Gmail and Google News.

"I am honored and delighted to lead Yahoo, one of the Internet's premier destinations for more than 700 million users," added the new CEO in a statement.

she's a hottie. i'd totally be a soccer dad.

If they let her do her job, then they may have a chance. Otherwise, here comes history repeating itself.

Originally posted by jemaric: she'll run it into the ground & google will goble it up cheap

Well... that's a possibility too...
http://onlyinrussellsworld.blogspot.com
Comments have been disabled for this article.