Google has sold out of the 16GB Nexus 7 tablet 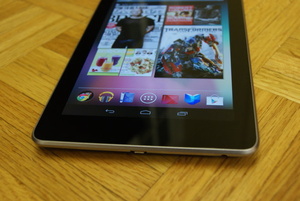 Google has sold out of the 16GB model of their new Nexus 7 tablet.
According to sources, this sellout is due to the fact that Google severely underestimated demand for the device at launch: "Google's planners had thought that buyers on the Google Play store, more than from physical or online retailers, would be more committed to the company's 'cloud' concept, and so would have more of their content stored online, rather than wanting to keep it on the device. But most buyers appear to have noted that the storage on the device cannot be upgraded and decided to get the larger model."

That fact, that Google left out a microSD slot, has been the only major complaint from new buyers and critics.

Google still has the 8GB model available through Google Play, with a 3-5 day delay in shipping.

I was hours away, from buying a 16gb Nexus 7 from a guy off Craigslist for $250.00 with a case!! The guy didn't want to make a profit and was giving me a free case?? something smelt fishy and i wanted to find out,why he was being so generous with the price and the free case.

So i ran a search for "nexus 7 issues/problems on Google and got several hits on multiples issues with the Nexus 7 tablet from 100's of people.

I ran several searches on Google and YouTube and watched many videos of people, demonstrating a slew of hardware and software defects. I wanted one and really wanted the Nexus 7 to be a great tablet but its not Google's time just yet,the next version of their tablet will be,just not now.

I walked away from the transaction,5 out of 10,nexus 7 tablets are reported to be faulty and defective.

One user said on the comments section of a article that he returned 5 different nexus 7 tablets, being all 5 had one or more defects of the many, reported.

There are a select few that have a perfectly working nexus 7 but i really didn't want to play, Russian roulette with getting a fully functional tablet, free of defects or a defective one.

I also read, that dealing with the return of the nexus 7 tablet, is a bit of a debacle, in of itself.

Its been said, that you don't get a response email, in a swift about of time and if you get a customer rep on the phone,you'll have to wait over a hour or so and then you'll still get the stiff upper lip,when they give you the run around on what you did to make it not work or they give you, the old age fix, "turn it off and on again".

I don't know for sure, if the guy had a defective nexus 7 tablet and was trying to load it off on me, because he did claim to check it thoroughly as i asked him to check for a few issues, even telling him to look at a few videos off YouTube to see for himself and check back with me,if he verified a few issues.

He says he found no issues( of corse ) and said his was defective free, i took it was a grain of salt as he told me, he didn't use it all that often, so how would he know if it has issues or not if he didn't use it that much?

It was too risky a gamble,it really wasn't all that serious as i have a iPAD 2 wifi-3g 64gb black model,i just wanted to try a good Android tablet and the new jelly bean OS as it has received good reviews.

Anyone have one,that they got and it has issues or is issue free? Please post as i am curious to know...