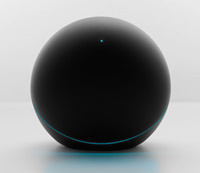 Google has made the Nexus Q streaming device available from its Google Play Store.
The company says any order placed today will ship within 5 business days.

Unveiled during Google's I/O event, the orb is described by the company as such: "Nexus Q streams your favorite entertainment directly from the cloud to your living room. Just use the Google Play and YouTube apps on your Android phone or tablet to surf an ocean of music, TV, movies and music, and Nexus Q will play it all on the biggest speakers and screen in the house. There are no downloads, no syncing, no running out of space. Just the stuff you love -- at home and out loud."

The all black orb has a flat bottom to place it on tables and a middle LED strip that goes on when the Q is being used to stream songs, videos and other content.

In terms of connectivity, there's a Micro-HDMI output, an optical audio port, Ethernet jack, plus a Micro-USB port, a set of banana jack speaker outputs, dual-band Wi-Fi, Bluetooth, and NFC (near-field communication) support. The banana jacks allow for speakers to connect to the built-in 25-watt amp with no separate AV receiver required.

Price will likely be what separates the potential buyers from those that actually do buy, as it comes in a bit expensive at $299. Notably, the device is designed and manufactured in the U.S.A., creating jobs for Americans.
Tweet
Tags: streaming Google nexus q available
<EU looking into optical drive makers dubbed a cartel >Why did Beats buy back stake from HTC?
Previous Next Write a comment
Comments have been disabled for this article.