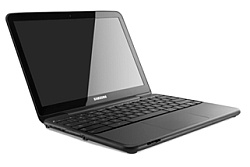 Google has updated its cloud operating system, Chrome OS, giving consumers the ability to watch movies they have purchased through the Google Play Store.
If you were already in the dev or beta channels, you have the update, but those in the stable release channel had to wait until this week.

Also included was a better app list, and a number of bug fixes.

Unfortunately, one of those bug fixes has caused some consumers from connecting to Wi-Fi, so Google has temporarily stopped pushing it.

Regardless, if you are a CR-48 or Chromebook owner, you should be able to watch your purchased/rented movies soon enough.
Tweet
Tags: update Chromebooks google play store bug fix
<Samsung to unveil transforming Windows 8 notebook >Analyst: Apple HDTV not coming anytime soon
Previous Next Write a comment
Comments have been disabled for this article.