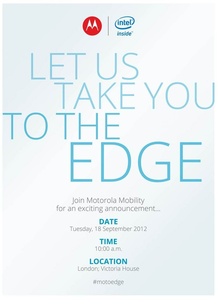 Motorola and Intel have sent out invites for a press event on September 18th, finally coming through on their CES promise of a collaboration.
The invite leaves little info except to say "Let us take you to the edge," with most anticipating a new smartphone.

If it is indeed a smartphone, it will likely be Motorola's first Medfield-based device. Medfield is the mobile chip codename being used by Intel for their new processors aimed at smartphones and tablets. The company has long fallen behind in the smartphone world, due to poor battery life caused by their powerful chips. This has allowed ARM-based chip makers like Texas Instruments, Nvidia and Qualcom to take large shares.

There is little else known about the device except that it is rumored to be Android 4.1, which is not surprising given that Motorola is owned by Google.

September is going to be an exciting month in the tech world. Can't wait for all the announcements!

Indeed, September will be exciting for tech. However, (nothing to do with your comment pensfan, so don't take offense) I'm a bit over Intel's domination of the processor market 'thing', if you will.

It seems to me they kind of have an Apple approach to processor sales. Stack em high, sell em high & buy off all the coding engineers to prioritize all the software to work with their CPUs primarily so as to drive the rest of the markets out (best case scenario) entirely.

That's the feel anyway & one that seems shared by a lot of the surrounding manufacturers as well. Not to mention the fact that their flagship processor tops at a crippling $1200 (well, current Newegg is $1000, but still) while a competitor can run at around $350/$375 (actually, Newegg $190, but who's counting). I fail to see the increase.

Yes, yes, I'm sure the Intel fans will 'come a racing', but it isn't necessary. Real world usage is what we're talking about & if software developers are favoring Intel over all others, then how can you stand there & quantitatively justify your stance?

You don't get to take home the gold when your athlete has been juicing. Having had all this blathering in mind, I'll probably pass on the Intel version of whatever they're trying to sell. Unless lightening strikes & the damn thing falls into my lap.

I have been a long time user of AMD processor due to their excellent price to performance ratio. However my horrible experience with their chip set for Phenon Quad on an MSI motherboard (major video AND USB problems) has made me rethink my strategy. In the past I always used via chi sets which may have given say 90 % performance compared to others but they has stability and reliability than none could match which was more important for me and my clients.

If AMD wants to get back into the game they need to collaborate with via and let board designers to the marriage !

Originally posted by pmshah:
If AMD wants to get back into the game they need to collaborate with via and let board designers to the marriage !


I tend to agree... VIA has had a tendency to let some boards 'go' because of being locked in bed with AMD & that's just bad for business.

Having worked extensively with Asus, MSI, Gigabyte, Tyan motherboards, tend to use the VIA 'branded' (actually has the name VIA on the chip) chipsets in their lower end models. Otherwise, they use AMD's spec'ed or tailored chipset followed by what I would understand to be a much more brutal scrutinized verison of VIA's offering.

I'm not aware that these board manufacturers are making any changes/modifications or versions of the chipsets of their own, however that would answer a lot as well. But there are simply times I have gotten a rotten experience with an AMD board & changed it out with a more pricey one & got a better ride.

Obviously, you're going to pay for it & sometimes it boils down to driver glitches being a bother, but the payoffs can be in dividends. Especially to my wallet!
http://onlyinrussellsworld.blogspot.com
Comments have been disabled for this article.