Recent headlines | Russia introduces new 100 rouble bill - but you can't get it from ATMs or to pay with it 1
AfterDawn > News > New guide: Preparing Assets For AfterDawn Blu-ray Authoring

Several months ago I contacted Valery Koval, the owner of a small software company called DVD-Logic. I was hoping to get extended access to one of his company's programs so I could write a guide for using it. Plus I really wanted an excuse to play around with it. DVD-Logic sells an entire line of very impressive Blu-ray authoring software, including two different menu creation programs. In fact one of those programs was what prompted me to get in touch with him.
Instead of simply granting my request for an extended license to Quick BD Menu, the program I had inquired about, he countered with a much more generous offer. He suggested that I might prefer to write some guides for what at the time was essentially the full range of DVD-Logic's Blu-ray authoring sotware and gave me a sort of extended trial license so I could continue using it far beyond the normal 21 day trial period.

That was a little more than nine months ago and I've spent much of the intervening time learning not just how to use EasyBD, Quick BD Menu, and IGEditor, but also about Blu-ray itself. One of the first things I realized when I finally decided I was ready to get to work on the tutorials for those programs I will begin unleashing on the public later today was that it was too complex a subject to expect anyone to follow along if I began in the middle - yet that's certainly what it would mean to just jump into the authoring process.


It's the journey and the destination


Considering how much I had to learn, and further understanding I knew far more about the subject when I started than the average AfterDawn reader, I realized I would need to take a more deliberate and thorough approach.Over the past several months regular AfterDawn visitors may have noticed that our Guides section has become home to an entire series of guides.

The AfterDawn Blu-ray Encoding Tutorial was began as an attempt to lay the groundwork so my upcoming authoring tutorials would be more accessible.In order to make the authoring process as predictable as possible and provide a 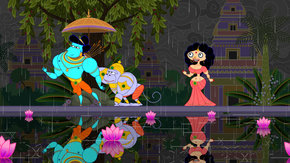 Introducing our main feature - Sita Sings The Blues
common point of reference for the reader I decided these new guides would need to revolve around a set of freely available files so that everyone could follow along every step of the way. Then I set to work preparing this collection of content for authoring.

At the same time I wrote the ten guides which currently make up our Blu-ray encoding tutorial. On a personal level it served as documentation for the process to help me get a better feel for all the steps and moving parts which were involved. But as I got further along, as two lessons turned into three and three turned into six and eventually six turned into ten, I decided there was one final piece of the puzzle I would need to put in place to help the reader prepare for authoring a Blu-ray disc.


Today that step is complete with the publication of a new guide titled Preparing Assets For AfterDawn Blu-ray Authoring Tutorials. Just like the name suggests the entire purpose of this guide is to provide instructions for preparing the video, audio, and subtitle assets, along with various other assets which will be used in the Blu-ray authoring guides AfterDawn will be publishing in the coming weeks. 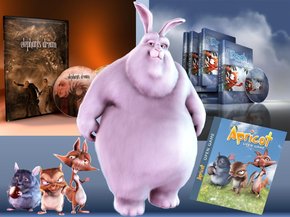 Meet Big Buck Bunny
The first installment of our EasyBD Blu-ray tutorial isn't quite finished yet. For anyone who may be interested in following along with it, though, you can get ahead of the game by preparing all these assets ahead of time. Some of the files you will be downloading and preparing will not be used immediately. In fact the first lesson in the EasyBD authoring tutorial only deals with a single title and even skips over the majority of audio and subtitle streams which will eventually be included.

But if you are interested in Blu-ray authoring, if you have any thoughts about making use of these upcoming tutorials, it would be to your advantage to get all the encoding, all the analyzing video and audio, and all the basic preparation out of the way before you start. It should give you a better understanding of the preparation which must be done ahead of time while also making it easier to focus on what for most people will likely represent a steep learning curve later.

The first day of the rest of our site


And one last thing while we're on the subject of AfterDawn content, I guess you could call it a request for some assistance from you. If I'm doing my job anywhere near right you have hopefully seen some slight changes to our content - both in the guides I've been working on and some of the articles we've been publishing here on the front page.

The little changes we have made to date are barely a hint of our bigger plans for the future. I can't be more specific than that - simply because I don't know a lot just yet - but what I do know is this. Over the last few months we, and by that I mean everyone from the top of the company on down, have been focused on rededicating ourselves, and by extension the whole of AfterDawn, to you - the people who make it possible for us to do this stuff for a living. In my case that includes making some changes to the content I've been creating, both the substance and the style.

I began by trying to better connect the guides I'm writing with our forums, and by extension the people who visit AfterDawn. My goal in all this is simply to engage our readers. In part this is merely a selfish ploy to convince you to

Other placees to give us your opinion

come back and generate more traffic for us. On another level there's more to it than that. Whether you come here once an hour, once a day, once a week, or just once in a life time we want to know what you think about what we're doing and how we're doing it.

For anyone who does make a habit of reading our guides this is a perfect time for you to do just that. For various reasons, some having to do with the content itself but some of it a result of some deliberate rethinking on my part, there are some (hopefully) subtle changes to the overall presentation and design with the goal of both practical and aesthetic improvements. Now it's your chance to let me know if I'm on the right track.

If you look at this guide and think to yourself, "what an ugly mess," don't hold back. I'll get over it. Or maybe you don't see anything different. Maybe it's not actually all that different except in my head. Maybe there's nothing that needs changed in the first place or perhaps there's just an obvious change we (and by we I mean me) are missing. However you feel about it - even if you just don't feel like wasting your time reading it, this is your official platform to let the powers that be here at AfterDawn know about it.

A great addition to our site and nicely written

While I'm not one to spend a lot of time fawning over anyone or thing I must say I have been a member for a good number of years (dont know if that makes me a senior or not) but over the years I have seen numerous changes here and all have been for the better. And yes I have noticed your changes in both format and content over the past few months. And so far the only thing I dont like is those annoying sales box's that pop up everytime I vist the site. (Way over the top) I agreed with PC Magazines concept a few years back when they said "you cant be objective about something if your trying to sell it" which was why for years they refused to accept advertising for any products they were reviewing that month. For the past few years I have found both your Guides and newsletter to be very useful and informative. As a trained IT professional I dont have time to do all the research that I get out of just one newsletter so in my opinion keep up the good work and I'll look forward to the next one.

Very informative as usual! The commitment to excellence is very evident here at AD and I've come to expect nothing less. Kudos!

"In all your getting, get an understanding!"