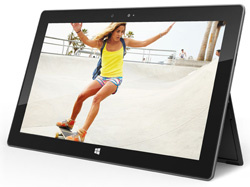 Acer to wait and see.
Acer has decided to delay the launch of tablets that run Microsoft's Windows RT operating system after Microsoft opted to release the Surface with Windows RT tablet last Friday.

Acer, an important partner for Microsoft, will wait to see and assess the performance of the Surface with Windows RT tablet before committing its own devices to the platform.

"Originally we had a very aggressive plan to come out very early next year but because of Surface, our R&D development doesn't stop, but we are much more cautious," Acer President Jim Wong told Reuters on Tuesday.

"Originally our plan was Q1, but now I don't think it will be earlier than Q2."

Acer has been a vocal critic of Microsoft's Surface tablet for some time. According to Wong, Lenovo and Asustek had plans to introduce Windows RT tablets at around $599, but Microsoft surprised everyone with the $499 Surface tablet (though that would not include the keyboard/cover).
Tweet
Tags: Acer WIndows RT surface
<ARM moves to 64-bit CPUs for future smartphones, servers >Megaupload case: Hold the government accountable!
Previous Next

Wong seems to be completely incompetent.

First, he whined to no end when Microsoft decided to build a product. A product which, by the way, has generated a lot of publicity and interest for the world of Windows 8 tablets across the board, not just the Surface. Executives at other manufacturers had enough brains to politely use the issue as an opportunity to talk about their own products, but Wong used it as an excuse to bash Microsoft and push back Acer's own manufacturing plans.

Second, Wong is now telling us that Acer is delaying its product cycle because of Surface. Is this news? Someone should tell Wong that the rest of the world has known for over four months that the Surface was coming out at the end of October. Is Acer just now getting around to making decisions today based on news that is four-months old? or did Wong just decide to wait until now to tell the world about a decision that Acer made four months ago? I suspect the real truth is that Wong was struggling to get Acer's product to market, and he is just using the Surface as an excuse. But no matter what the real explanation, his handling of the issue has been utterly incompetent.

Third, Wong is telling us that "Lenovo and Asustek had plans to introduce Windows RT tablets at around $599, but Microsoft surprised everyone with the $499 Surface tablet." Hint to Wong: Asustek has, in fact, released an RT tablet at $599. It's pretty cool. The release of the Surface didn't change that. As an executive at Acer, you might want to keep up to speed on what products your competitors have and haven't released.

No surprise Acer's stock is down more than 50% since this buffoon took over as President. I wonder how long it will take Acer's Board of Directors to get rid of this fool.