Written by Andre Yoskowitz @ 15 Nov 2012 8:28 User comments (4)
Android has now left Apple and others to fight for the scraps in China.
According to the latest figures from Analysis International, Android now has 90.1 percent of the smartphone market share in China. In early 2011, the mobile OS had just 46.8 percent, making the latest number even more impressive.

The firm even speculates the number may be higher, as they do not include knock-off "white box" phones, most of which run on variants of Android anyways.

Apple dropped to 4.2 percent, remaining in second. This number may also be skewed, as well, since the company does not include grey market imports including the new iPhone 5 which has not made it to China yet "officially."

In the same period, Nokia's Symbian fell from 31.8 percent share to an irrelevant 2.4 percent, as the company leaves the OS for dead. 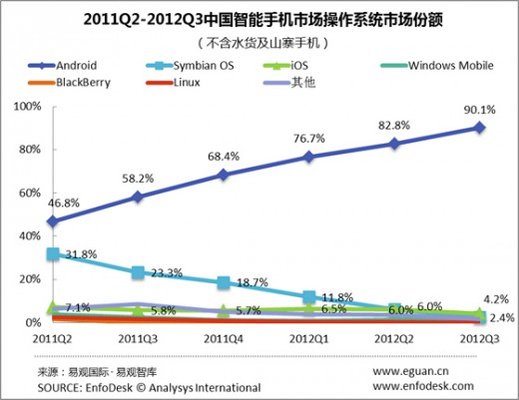 Time to sell your Apple stock, it's going to be a bumpy f*cking ride. Can you say Blackberry?

What's funny is google is banned in china . So 0 money is made on the software . And u don't want poor people using your operating system as they are poor . Apple serves rich which purchase more

Originally posted by Justoneguy: Time to sell your Apple stock, it's going to be a bumpy f*cking ride. Can you say Blackberry?

Oh no you didn't lol
AfterDawn News
AfterDawn Guides
One of the largest collections of software on the Web: AfterDawn Software Section
419.11.2012 09:40
steve2221
Unverified new user

Android is Linux. Duh! It's a distro specially designed for mobile devices, just like all the other distros that were designed for whatever market niche. Linus Torvalds is the creator of the Android kernel and he still maintains it. This kernel is also used in Suse, Red Hat, Ubuntu, etc.