Xbox World magazine goes all out with 8-page feature on Xbox 8 including specs, mocks 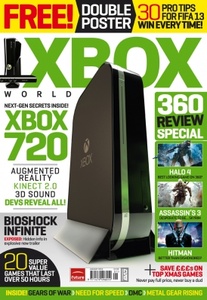 Xbox World, which is set to cease publication after their December issue, has published a large 8-page feature showing off "everything" they know about the upcoming Xbox 8/Xbox 720/Xbox Next/Xbox/Durango.
The magazine has a good track record for Microsoft Xbox leaks, but with no official confirmation until next year, at least, take everything written with a grain of salt.

Says editor-in-chief Dan Dawkins (via CVG): "Xbox World has been at the cutting edge of Durango coverage for over 12 months. Unless something really dramatic changes, everything we reveal in our penultimate issue will be revealed long before E3 in June."

The mag speculates Microsoft will name the upcoming console simply "Xbox," similar to how Apple has stopped numbering their iPad tablets.

With its release, the new Xbox will introduce Kinect 2.0, Blu-ray support, directional audio, a TV output and input, a new 'innovative controller' and finally, augmented reality glasses (to be released in 2014/15).

Current dev kits "boast a CPU with four hardware cores, each divided into four logical cores" and 8GB of RAM, says the magazine.

Finally, the company created a mock of the upcoming console based on Microsoft's new products and industry sources. 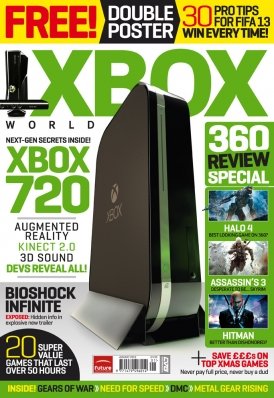 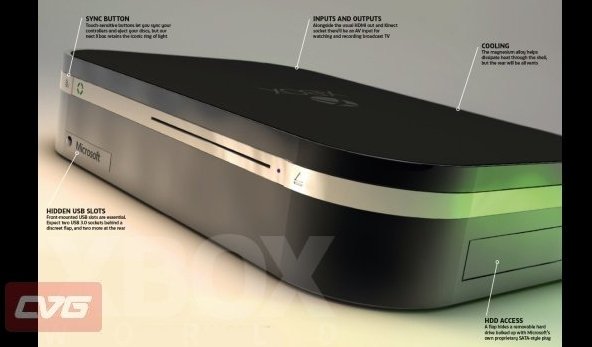 Very ugly mockup, but then that has lots of time to change (just look at some of the early PS3 concepts). Odd that it has TV input but apparently no cablecard support. Not sure how much value support for antenna TV adds to it. Maybe it has something like an IR blaster...but if you need a cablebox anyway, it adds little value to the Xbox. I sure hope they keep some kind of numbering system on it if only to remove confusion.

Gee will it play Xbox games?

Copyright infringement is nothing more than civil disobedience to a bad set of laws. Lets renegotiate them.
622.11.2012 12:09
blueboy09
Send private message to this user
Senior Member

Wow we read print magazines in this day and age? Who would've thought that? LOL

Chance prepares the favored mind. Look up once in a while and you might learn something. - BLUEBOY
722.11.2012 15:49
sammorris
Send private message to this user
AfterDawn Addict

Looks a lot better than the classic 360 IMO.
Looking forward to it though, if only to narrow the technological rift between current consoles and PCs so more cross-platforms work out better.

mmm I Don't know, it looks very similar to an iphone in shape lol.
Watch out Xbox might get sued by Apple

Nice and smooth with clean lines. I like it.

i want to know how much it is

Oh oh! my days of playing games for my old age has not finish yet., will buy an Xbox 720 at launch? YES

Calling it just "Xbox" is a terrible idea. It will cause mass confusion when trying to do internet searches. Most people already use the term Xbox for their 360 and then theres the original Xbox too. Trying to differentiate which console is showing up in search results will be a huge pain.

Originally posted by voyager: Oh oh! my days of playing games for my old age has not finish yet., will buy an Xbox 720 at launch? YES

I'll save 300$ and wait a couple years and get it used. LOL
Copyright infringement is nothing more than civil disobedience to a bad set of laws. Lets renegotiate them.
148.1.2013 04:45
wtfsammy
Unverified new user

when is this magasine coming out