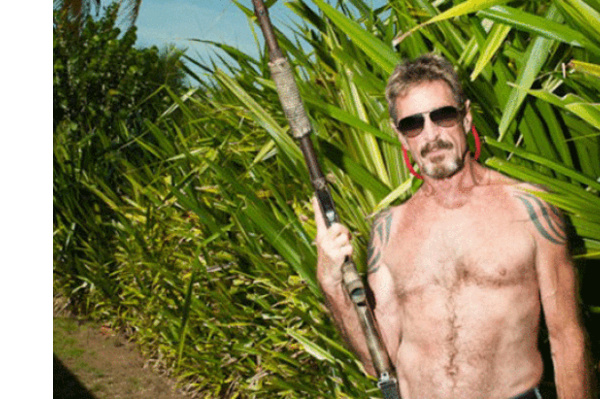 John McAfee, anti-virus software pioneer and potential bath salts junkie, has written this week on his blog that he is offering $25,000 to anyone who helps capture the murderer of expat Gregory Faull.
Faull was murdered last week near his home in Belize and the story was broken that McAfee was the lead suspect in the case.

Since then, McAfee has been in hiding but also blogging about his adventure, including how he dresses in disguises daily. One such disguise is a Guatemalan street vendor with a limp. He has said the charges against him are a vendetta for his refusal to donate money to Belize's ruling United Democratic Party.

For now, McAfee says he wants to find justice for Faull's murder and is willing to do so monetarily.

The developer told interviewers two years ago that his once $100 million fortune had dwindled to $4 million due to the financial crisis in 2008.
Tweet
Tags: Reward john mcafee murder
<Xbox World magazine goes all out with 8-page feature on Xbox 8 including specs, mocks >Funny: Apple has an employee named Sam Sung
Previous Next

Well you can't say McAfee is stupid, it worked for OJ, should work for him too?

i just googled john mcafee and it seems hes paranoid and slightly crazy.No one actually knows if he did it or not.the weird thing with paranoid people is there is usualy logical reasons why they are paranoid.

the antivirus software he made was not the best.

Originally posted by xboxdvl2: No one actually knows if he did it or not.

...And that includes him.

Quote:his once $100 million fortune had dwindled to $4 million

That's a lot of bath salts!

Quote:his once $100 million fortune had dwindled to $4 million

That's a lot of bath salts!

...And guns, and hookers...I hope his personal anti-virus routine is better than his software.

This guy was on the Joe Rogan podcast. It was an interesting listen for 2 and a half hours.

Originally posted by factor7426: This guy was on the Joe Rogan podcast. It was an interesting listen for 2 and a half hours.

was interesting reading about him.
custom built gaming pc from early 2010,ps2 with 15 games all original,ps3 500gbs with 5 games all original,yamaha amp and 5.1channel surround sound speakers,46inch sony lcd smart tv.
Comments have been disabled for this article.