'Angry Birds' soda beats out Coke and Pepsi in Finland 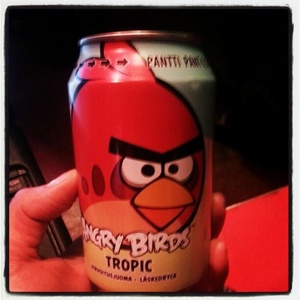 Finnish company Rovio, the makers of the Angry Birds franchise, recently released their own soda in the nation.
According to new reports, the soda is more popular in the Finnish market than behemoths Coke and Pepsi, outselling both this month.

Rovio CMO Peter Vesterbacka added that the soda will soon be available in new countries, including Australia and New Zealand.

The source says the soda "tastes a bit like Lilt but less sugary and maybe a bit more like apples."
Tweet
Tags: Angry Birds Rovio coke pepsi
<'Gangnam Style' is now the most viewed YouTube video of all-time >Congress wants the terrorist Twitter pages shut down
Previous Next

omg,,, good keep it in those countrys.. haha
pretty soon gangman style ( however the hell ya spell it ) will want there own soda pop!

hmmm i drink softdrinks.pepsi is a joke,seriously taste too flat.for standard cola i would go with coca-cola.i been trying a range of imported drinks from local supermarket.tryed cherry coke,cherry 7up and cherry dr pepper and they have a whole range of imported drinks some i havnt heard of.wonder how long until they get angry birds,i would try it but seriously dont know if it would be anygood.
think sometimes its a brand name that sells and not actual taste.

Boy, I'm really surprised. Friggin sheeple will buy anything with an angry bird face LOL! That said, I happen to like Angry birds :S