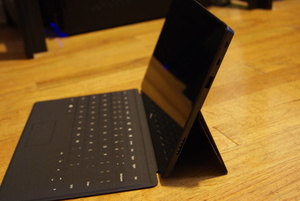 Microsoft has finally unveiled the pricing for their upcoming Surface Pro tablet.
The tablet, which runs on Windows 8 Pro as opposed to the current Windows RT-based versions, will start at $899 for a 64GB model and reach a cool $1000 for the 128GB model.

Each of the stated models will come with a stylus but will not include a Touch or Type cover, which cost $100-$130 and are what make the Surface a truly productive device.

Both will be available mid-January but there was no timeline for when pre-orders will begin.

From a design standpoint, the devices will look the same as the existing Windows RT tablets, but under the hood they are very different. The tablet has a full 1920x1080 resolution, a third-generation Core i5 processor and a full Intel HD Graphics 4000 GPU. Additionally, there are 4GB of RAM, a Mini DisplayPort, a USB 3.0 port and Windows 8 Pro, which gives access to all existing Windows applications, making it infinitely more usable than RT.

The device will weigh 2 pounds (compared to 1.5 for the RT) and include a 42W-h battery which will offer just 4.5 hours of juice compared to 8 for the RT.
Tweet
Tags: tablet surface windows 8 pro
<TVShack admin avoids extradition to the U.S. >Bloomberg: The next Xbox will be here by the holidays of next year
Previous Next

Well, now we know...
I don't feel that is competitive at all. Good luck with that, Microsoft.

Competitive in the Ultrabook market I guess?

Microsoft just doesn't get it. This thing could have been a huge hit. Not with that price. Should at least include the touch cover. FAIL!

Oh, Im sorry... Did the middle of my sentence interrupt the beginning of yours?
629.11.2012 20:38
Ripper
Send private message to this user
AfterDawn Addict

With that said, this fits a niche, and I think it will sell well for business. I will get either an RT or a Pro for work. I travel enough that I don't enjoy hauling around both a laptop and a tablet. Both of these devices strike a nice compromise. As a work tool, it's easy to justify the price. I am disappointed that the battery life is so much lower on the Pro model, and that may steer me to the RT. The digital ink option on the pro model is very nice. I'll have to try it out in January and decide whether it is worth the extra size/weight/lower battery life.

For Microsoft to sell the Surface pro outside of the business world, they're going to have to convince people that it is a true laptop replacement. That may be a struggle.

just a quick question how much free memory is on it?????

Originally posted by xboxdvl2: just a quick question how much free memory is on it?????

Originally posted by DVDBack23: For a 64GB model, there is just 46GB of free space at initial boot.

Almost 38% used for the OS etc install on the Surface RT, which could suggest something like 40GB used on the Pro - if they haven't hit a ceiling amount that the install could require out-of-the-box before that point.

Is it April the 1st?

that image is great lol

I own the RT 68gb now and I like it a lot....here are my grips...the speakers suck, camera works great on Skype but sucks for pictures... Oh and its RT... I am finding myself wanting freedom to download anything...

I am buying the pro 128gb first day I can.... So far windows 8 has been great. Learning curve is five minutes if u reading this forum. It will be a true desktop replacement as u can do anything with it... Including adding up to 64gb of memory with a SD card for the person gripping about memory usage... Full usb 3 support and upgraded graphics... Faster than anything on the market with more space that is actually usable as a desktop, laptop, or lesser tab replacement... Could the price be lower, well it could ....but hey I would like Audi to drop the price of the r8 gt to 75k I would like to get a 4k tv with descent size for less than 5k but at the end of the day I buy what I can afford and save to get (in my mind) the best... Price is right for the specs, people paying crazy amounts to lease (has full control over your purchase unless u jailbreak it) Apple products at least we can do what we want with this one....

Does this come with the viruses pre-installed or do you have to wait for them to install themselves?

LOL great job MS! Way overpriced - and you don't even include the cover/keyboard.

Please, explain why I would want to spend that kind of money for THIS?

Originally posted by vanarie: Does this come with the viruses pre-installed or do you have to wait for them to install themselves?

I don't believe the prices are too crazy (actually believe they are well priced), but not adding the Touch Cover is inexcusable.

AfterDawn News
AfterDawn Guides
One of the largest collections of software on the Web: AfterDawn Software Section
1830.11.2012 17:07
hearme0
Send private message to this user
Senior Member

This really isn't a rip off considering it's an absolute full laptop replacement and significantly smaller and lighter. Laptops of this nature will run a grand easily.

This is superman
201.12.2012 12:18
megadunderhead
Send private message to this user
Senior Member

No thank you when i can get a i7 macbook air for 999.00 i would rather have a new processor not a 2 year old i5 nice try though microsoft

All you commentators who say you don't think it's overpriced...are YOU planning to buy one?

I have a kindle and ipad and a big desktop replacement laptop tipping the scales at 7.8 pounds.

With that said I do presentations, sales and create things all the time. I don't want another friggin laptop with a small screen. I already have a laptop. Everywhere I go I use a projector or secondary monitor unless I'm travelling. This being as light as it is seems to be perfect. Yes, very niche for my uses but it fits my needs.

I want to utilize full desktop apps. The RT can't do that and the ipad can't do that. I don't need another clamshell either. I will be getting these for myself and my counterparts. I have played with the nexus 7 but the security is fail for now. We hired deloitte to do pen testing and we can't use android on anything, yet......

Originally posted by bdaleypsu: All you commentators who say you don't think it's overpriced...are YOU planning to buy one?

Originally posted by Morreale: Competitive in the Ultrabook market I guess?

Hell, you can get yourself a decent Ultrabook with good features with a price like that! With Ultrabooks getting cheaper, this is a disappointment for Microsoft, cause they don't need to turn into another Apple!!
Chance prepares the favored mind. Look up once in a while and you might learn something. - BLUEBOY
254.12.2012 02:25
xboxdvl2
Send private message to this user
Senior Member

the 128 gb memory - the memory the os uses is a big problem.if they made a 500gb model it might be able to replace a laptop.

Originally posted by bdaleypsu: All you commentators who say you don't think it's overpriced...are YOU planning to buy one?

Of course.. have the RT now.. giving that to my wife to replace her kindle... Im just waiting for the preorder email.
277.12.2012 02:43
bdaleypsu
Send private message to this user
Junior Member

Originally posted by Royyan: I think they are a little bit expensive, since there are many great but less-expensive product on the market. Its price is not competitive at all.

Especially when you have to pay extra for the case/keyboard.
287.12.2012 07:44
ctyankee5
Send private message to this user
Newbie

I'd rather have an iPad and that's why Microsoft is the world's most irrelevant company?

Saw one of these things on "Elementary" last night. Sherlock made a big deal about attaching the keyboard and opening the kickstand.
It was kinda cool, but kinda obvious.