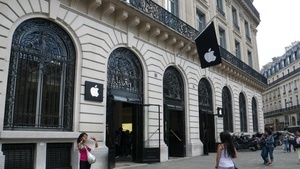 While police were otherwise occupied at more crowded areas, masked men robbed an Apple Store in Paris, France on New Year's Eve.
The thieves managed to steal over 1 million euros worth of iOS products.

300,000 people were celebrating the new year in the area around the Champs-Elysees, justifiably leaving authorities short.

The report says "masked men forced their way into a back entrance around 9pm, three hours after the store closed, as a janitor was leaving. The janitor was "lightly injured" in the process."

Stocked materials were taken leaving all display devices alone, and the group packed the boxes into a truck parked nearby.
Tweet
Tags: France Apple Store robbed paris Champs-Elysees
<Metacritic: 2012 was terrible year for games >Touch-based Ubuntu OS will be here at 1pm
Previous Next

Not to imply I am a fan of the Evil Empire but as locked up as they like to keep things. aren't these guys boned as soon as they turn one on or?

You have to understand that they will most likely sell it and make money that way, while the end user will get screwed over for buying a stolen product unknowingly. From what I understand, they stole unopened merchandise, and I doubt it will be locked down until otherwise. So in the end, they will make money and everyone else get screwed over.

The thieves forgot to burn the store.