Recent headlines | Logitech ends its line of Harmony remotes 1
AfterDawn > News > Next Nexus 7 to feature 1080p display and launch in May?

Next Nexus 7 to feature 1080p display and launch in May? 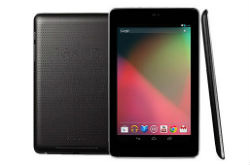 According to sources, Google and Asus are preparing a sequel to the Nexus 7 for May.
Google's 2013 I/O conference is set for May 15th, which would make a great time to unveil the tablet.

Most notably, the new Nexus 7 will have a Full HD (1920 x 1080 resolution) display along with a thinner bezel.

Everything else will be the same, say the sources, and the tablet will run on the latest iteration of Android Jelly Bean.

In keeping with their competitive pricing, the tablet should sell for the same prices as the current model Nexus 7, $199 or $249 for 16 or 32GB, respectively. This could drop the price of the current Nexus 7 to $150, which will likely lead to at least a short term boost in sales for the popular Android series.
Tweet
Tags: Asus tablet 1080p nexus 7
<T-Mobile version of Nexus 4 now available at Best Buy, Wirefly >Rdio offering free music streaming to 14 new nations
Previous Next

HDMI out and im sold

Quote:Everything else will be the same

looking forward to it