About.me goes independent after buying itself back from AOL 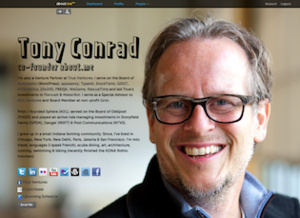 This week, About.me, the online personal portal site, announced that it had purchased itself back from AOL, which had bought them in 2011.
About.me lets users create a "digital business card" that links to their sites around Web like Twitter, Facebook, LinkedIn and any other business or personal link.

Co-founder Tony Conrad says he was able to buy the site back for "a fraction" of the cost that it sold for, which was rumored to be as high as $40 million. Conrad says the company can better thrive in an "autonomous" setting, "I think we can build it so much faster, and so much better, by making it independent again. There's no obvious leverage in being part of the AOL media network, and there's no synergy and integration."

Conrad and other co-founder Ryan Freitas will regain full control of the service when the deal closes. AOL will keep an 8 percent stake.

About.me had mostly fallen off the map after being acquired, with AOL still struggling to find their place in the world.
Tweet
Tags: AOL acquisitions about.me tony conrad
<Redbox Instant heading to Xbox 360 >Apple to lose 'iPhone' trademark in Brazil
Previous Next Write a comment
Comments have been disabled for this article.