BBC to run shows on iPlayer before broadcast TV 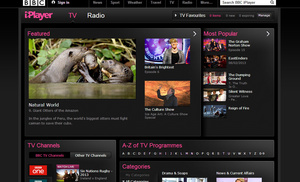 In 2012, the BBC iPlayer served more than a billion videos and radio streams to Internet users. Around 2 percent of all BBC viewers watch its programming solely via the Internet.

BBC's iPlayer is available across platforms, such as games consoles and mobile devices, and while the license-payer funded service dwarves the private competition, services like Netflix can benefit in the long run to more consumer adopting of Internet streaming as opposed to TV viewing.

The BBC has not yet decided exactly which programmes will be available on iPlayer first.
Tweet
Tags: BBC iPlayer
<Rumor suggests iPhone 5S, iPhone 6 in 2013 >Amazon has e-book resale patent
Previous Next