Collector selling 'the history of video games' collection for at least $550,000 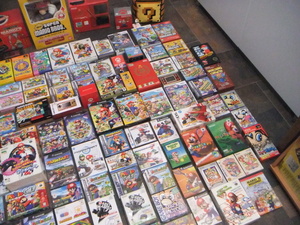 One collector is using eBay to sell one of the largest and most complete video game collections in the world.
Such a collection will set you back $550,000, as of now, and there currently is one bidder.

After a life spent collecting video games I decide to sell off my entire collection.

I just have too much things and the space to store them is finished long ago... also I realized that if I want to play at least half of my games, I should live two or three entire human life...

Just to give an idea of the huge amount of items present in my collection, I spent the last two months of my life taking pictures and making lists, working about eight hours a day just in order to make an inventory and to figure out what I have. Even now after all the time spent checking things I'm not sure to have included all in the lists. Due to the sheer amount of items is even difficult to present it, and I don't really know were to start... so I try to do my best even if I'm sure I might forget something.

Instead to pick up some favorite consoles and maybe try to complete all the games related, I choose to collect most systems possible with the most representative and rare games for each console. This collection is the story of the videogames from A to Z, from the game & watch and old pong systems to the actual generation of PS3 and XBOX360.

I think that with all the stuff in this auction you can actually open a museum...

And now some numbers. I divide the collection in various categories:
Games, Consoles, Controllers, Accessories, Promotional and various items.
-The games count over 6850 pcs. with about 6780 boxed and 70 loose, and are in various format NTSC Japan or Usa and also PAL.
-The consoles are over330, with 307 system boxed and 24 loose, and even in this case we have all the different standards.
-The controllers are about 220 with 167 boxed and 52 loose. I included all the kind of controller, from the simple joypad to the special controller like all the konami bemani to the densha de go train controller, and the arcade joystick as well.
-The accessories are about 185, and in this category I put the ac adapters, the various av cables, the rumble packs, the memory cards, battery packs, the converters for the region locked games, and various other items like screens, printers etc.

If you have over half a million dollars to spare, check out the auction here: eBay History of Video Games

That is a pretty impressive collection. The amount of time and money spent in getting rare games or even collecting all games for a system. You think when his collection was small and started to get bigger he would start documenting all games, systems, and accessories.

Very impressive. My collection is nowhere close to this but I like to think I'm getting there. Wife hates it but ah well.

those looking for the auction on ebay the title of the listing is: OVER 30 years of VIDEOGAMES COLLECTION... The history of VideoGames

I'm not sure what happened but it's no longer present. 0 bids is what I saw.

I'm hoping a museum bought it. You've got to consider that it's not just the collected worth of those games but the effort behind amassing it.

I sort of thought it would be hard to sell. While it is an amazing collection, who has half a million to just spend on video games and consoles?

Originally posted by Mr_Bill06: I sort of thought it would be hard to sell. While it is an amazing collection, who has half a million to just spend on video games and consoles?

The Powerhouse museum in Sydney Aust could have bought it (for instance).
Its a lot easier being righteous than right.