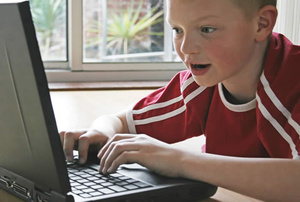 According to a new report from anti-virus firm AVG, young children have begun writing malicious code to hack accounts of friends and others.
The code is aimed at stealing virtual currency from others on gaming sites and social networks. Many games (especially those on Facebook) now sell virtual currency, which can be used to purchase upgrades in the game, such as weapons or new characters.

AVG says the children, that are as young as 11, must be educated on the rights and wrongs of coding.

"As more schools are educating people for programming in this early stage, before they are adults and understand the impact of what they're doing, this will continue to grow," added Yuval Ben-Itzhak, CTO at AVG.

Most of the "amateur" code was written using basic languages such as Visual Basic and C# and included errors that made it easy to reverse engineer and find the original source of the code. Adult coders would not have made such mistakes, says AVG.

One such example was a "cheat program" for Runescape. The program promised free currency (gold) but instead stole log-in details. The code was sloppy, however. "We found that the malware was trying to steal the data from people and send it to a specific email address. The malware author included in that code the exact email address and password and additional information - more experienced hackers would never put these type of details in malware." The email was that of an 11-year-old in Canada. Researchers were able to use the code to even discover where the child lived, and what phone he used.
Tweet
Tags: hacking AVG gaming virtual currency coding
<Microsoft understated free usable space for Surface Pro >Collector selling 'the history of video games' collection for at least $550,000
Previous Next

so this doesnt surprise me at all

Riiiight. People in my position are going to stop having virtual currencies because "some kid steals it". I guess we shouldnt have candy either, or money in general.

I used to download Runescape malware off of Youtube and decrypt them for the email account info that they sent user info to. Made it a little hobby for a month and in the end I bought myself a nice watch.

Originally posted by Morreale: I used to download Runescape malware off of Youtube and decrypt them for the email account info that they sent user info to. Made it a little hobby for a month and in the end I bought myself a nice watch.

Hahaha. Nice.
Someone told me once that theres a right and wrong, and that punishment would come to those
who dare to cross the line.
But it must not be true for jerk-offs like you.
Maybe it takes longer to catch a total asshole.
521.2.2013 05:03
xboxdvl2
Send private message to this user
Senior Member

i dont think kids should be using parents money on virtual ingame items.school fees,clothes,food,stationary and other things are neccessary but virtual items on a computer game are not and if the kid wants them he or she should have to work for the parents to earn the money to buy them not steal them.